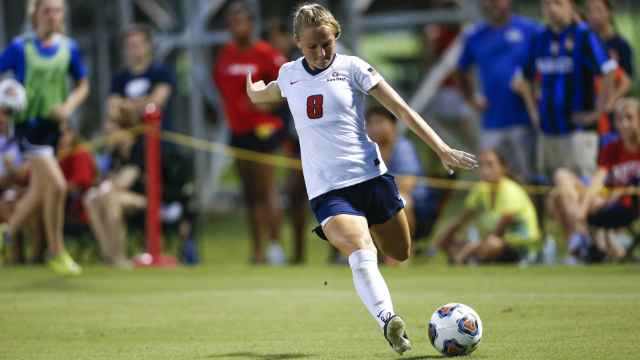 What a week it’s been for South Alabama.

The Sun Belt powerhouse endured its share of ups and downs prior to last Monday’s meeting with Florida State. But an early goal from Charde Hannah, and an ironclad defensive effort, secured a historic 1-0 win for the Jaguars last week.

It was a tone that continued throughout South Alabama’s next two games, as they managed to beat Austin Peay 1-0 and followed that up with another win against a power conference opponent, beating Mississippi by the same school.

Sophomore defender Jemma Purfield played every minute of all three wins at the back, guiding a defense that featured mostly sophomores and freshmen in all three wins.

Find out who joins her on the latest Team of the Week below.

GK Evangeline Soucie, Kentucky – While Soucie ended up conceding two goals, she turned in one of the best performances in goal at this point in the season against Florida. Soucie made 11 saves, several of them of high quality, keeping Kentucky in the mix in a 2-1 loss to the Gators. Soucie started and played the majority of a shutout on Sunday as Kentucky bounced back.

D Jessi Hartzler, Arkansas – Despite last weekend’s hiccup against George Washington, Arkansas’ strong start to the season continued last week with a 5-2 win against Mississippi State in its SEC opener and a 1-0 shutout against North Texas. Hartzler had an assist in the win over MSU, and scored the winner against the Mean Green.

D Jemma Purfield, South Alabama – It was a memorable week for Purfield and the South Alabama back line, which won three 1-0 games last week. Purfield played every minute in victories that included wins against the Seminoles and Rebels. Defending for long stretches, Purfield and the rest of the Jaguars defensive shutdown two impressive attacks.

M Morgan Andrews, USC – Andrews powered USC to a pair of wins, scoring in a vicotry over Loyola Marymount and nabbing the game-winning strike in a 3-0 defeat of North Carolina.

M Chatham DeProspo, Alabama – The Crimson Tide rolled to a big 5-1 win over Tennessee in its SEC opener. DeProspo conjured up some magic in that victory, scoring three times in the victory.

M Rachel Corboz, Georgetown – Corboz bagged the game winner in Sunday’s win against No. 4 Virginia, curling home a free kick from 25 yards out. She also had an assist as the Hoyas beat George Mason last week on the road, earning Team of the Week honors for the second week running.

M Allison Wetherington, Portland – A positive start to 2016 continued for the Pilots, highlighted by a solid 2-1 victory against St. John’s on Sunday. Wetherington had a goal and assist in the win over the Big East program.

F Tabby Tindell, Florida Gulf Coast(w) – It was a big weekend for Tindell, who got her week rolling with the game-winning goal in Florida Gulf Coast’s 1-0 win over Miami (FL) on Friday. She also scored twice and setup another in a heart-breaking 4-3 loss to UCF.

F Tyler Lussi, Princeton – The senior striker had a hand in four of the team’s five goals over the weekend. After her brace led the Tigers to a 3-0 win against Temple, Lussi assisted on both goals as Princeton beat Monmouth 2-1 in overtime.

F Michaela Abam, West Virginia – WVU assumed the No. 1 spot as Abam’s pair of goals led them to 3-1 win against Duke on the road. The Mountaineers have now won six games in a row.

F Kendall Ham, Bucknell – Leading an offensive explosion over the weekend, Ham scored five times as the Bison romped to a pair of wins by a combined scored of 13-0.