While Pepperdine is surely ready to stick around Malibu and the SoCal area for a few weeks after back-to-back weekends on the road, senior forward Lynn Williams sure made the last two games away from home were memorable.

Williams tallied three times in two games and added an assist for good measure, guiding Pepperdine to a 2-0 win against Xavier and a 3-2 overtime win over Kentucky. Her exploits, which included the game-winning strikes in both wins, earn her this week’s Player of the Week honors.

Below is a look at the complete team of the week as the women’s college season continues to chug along. 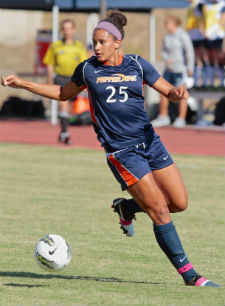 GK Megan Hinz, Michigan: It appears that the talented Maryland native has seized the starting role for the Wolverines and she helped Michigan to a pair of opening-weekend wins in Big Ten play. Hinz made 11 total saves in dramatic, 2-1 victories against Minnesota and Wisconsin.

D Kendall Romine, Stanford: Played all 183 minutes over the weekend as the Cardinal picked up a pair of wins. The first was a narrow 1-0 win against Florida, while Romine also scored and assisted in Sunday’s 8-0 defeat of Dayton.

D Melanie Pickert, Iowa: The Hawkeyes picked up wins in their first two Big Ten encounters, blanking Illinois and Northwestern. Pickert, who played the full 90 at the back in both wins, bagged the game winner in Friday’s defeat of the Illini.

D Maddie Bauer, Stanford: Alongside Romine, Bauer helped keep the dangerous Florida attack off the board, limiting them to just a single shot on goal. Also contributed an assist in the win against Dayton.

D Corey Burns, Iowa: Teaming with Pickert at the back, Burns played 180 minutes in the two shutout wins, scoring the game-winning tally in a 1-0 win over Northwestern.

M Morgan Andrews, Notre Dame: In a Sunday win against Toledo, Andrews scored both Irish goals on the day, including the winner from the penalty spot. Also helped the team blank Baylor on Friday in a 1-0 win.

M Marta Bakowska-Matthews, Florida State: In their two games over the past week, the Seminoles exploded for 11 goals, and Bakowska-Mathews had a hand in five of them, scoring four and setting up another. It was the first hat trick for FSU since the 2011 season.

M Danielle Colaprico, Virginia: With Morgan Brian absent through USWNT duty, Colaprico stepped into the central attacking midfield role and handled it nicely, scoring twice and assisting another as Virginia won a pair of tricky games on home turf.

F Lynn Williams, Pepperdine: Her three goal haul from the weekend trip to Kentucky and Indiana saw Williams raise her total for the season to five, as her star continues to shine bright.

F Murielle Tiernan, Virginia Tech: It was a hectic week for the Hokies, which battled through three games from Tuesday through Sunday. All three matches resulted in big wins, as Tiernan scored five goals during that stretch as they wrapped up their non-conference slate.

F Janine Beckie, Texas Tech: The Canadian youth national teamer accounted for both of the Red Raiders game-winning tallies over the weekend, a 1-0 overtime defeat of California, and notched the decisive tally in a 2-0 win over Abilene Christian.