Team of the Week: September 14 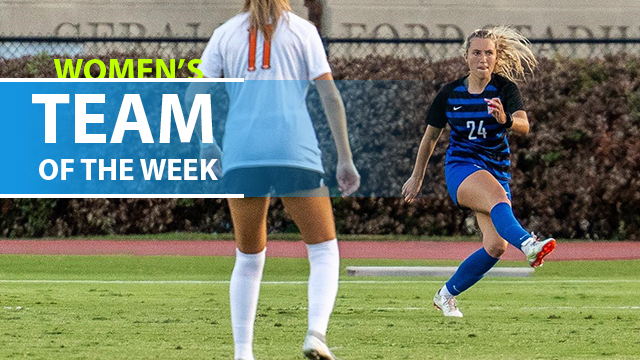 Bagging three wins in one week, including two away from home, is a good way to prep for conference play.

And while SMU has another weekend to go before jumping into action in the American Athletic Conference, the Mustangs spun off three wins over the past seven days. Sophomore center back Payton Doiron anchored those results, as the Mustangs beat Denver away, Oklahoma State at home and Rice on Sunday by a 1-0 score.

Doiron played every minute of all three games, scoring the winning goal against Oklahoma State. Backing it up in conference play is next on the agenda.

Check out some of the other top performances from the past week of the women’s Division I soccer season.

GK Allie Augur, Georgetown – While the Hoyas surely would want to have more than three wins at this point, they still haven’t lost. Augur played a big role in Sunday’s 1-0 win over Rutgers, making eight saves. She also made a pair of stops in a 0-0 draw against West Virginia.

D Trinity Watson, Pepperdine – Winners of five straight now, the Waves are rolling after two more wins this past week. Watson had two assists against UC San Diego, and then bagged the winning goal over the weekend in a 3-0 defeat of UC Santa Barbara.

D Payton Doiron, SMU – After playing just two games in the 2020-21 season, Doiron has slotted into the starting lineup and become a big part of the early success for the Mustangs so far.

D Jordan Brewster, West Virginia – The central defender helped keep Georgetown from finding the back of the net in Thursday’s 0-0 draw. She also had an assist and helped her side keep a shutout in a 5-0 win against Saint Francis (PA).

M Hal Hershfelt, Clemson – A superb performance from Hershfelt helped the ACC side pick up bragging rights last Thursday in a 2-1 win against South Carolina. She scored goals in both games, also tallying in a 4-0 win over Gardner Webb.

M Sam Coffey, Penn State – A goal and assist from Coffey helped the Nittany Lions pick up a 4-2 win against UVA in Charlottesville. She also helped her side pick up a 1-0 win over NC State on Sunday.

M Miri Taylor, Hofstra – The Pride kept rolling last week, and have bounced back from a 2-1 defeat to Penn State at the end of August. Taylor was once again at the heart of it all, scoring three goals and chipping in two assists against Bucknell and Yale. She now has eight goals and five assists on the season.

M Murphy Agnew, Harvard – With three goals in two games, Agnew helped Harvard draw 3-3 against BC, and pick up a big 4-1 win over Monmouth.

F Messiah Bright, TCU – The senior enjoyed a prolific week in front of goal for the Big 12 side. She scored the winner against Alabama in overtime, before adding a brace in a win over Ohio State.

F Peyton DePriest, Middle Tennessee – DePriest scored three goals, including both tallies in a 2-1 win over Vanderbilt on Sunday.

F Heather MacNab, Princeton – It’s been a storming start for MacNab’s college career, as the 2020 graduate deferred enrollment until this year. She scored twice goals (both penalty kicks) and had two assists in a 4-3 victory against Rutgers. The freshman also assisted in Sunday’s 2-0 win over Rhode Island.