It’s never easy to come on the college scene as a freshman and make a significant contribution.

Yet all over the country, first year players with the talent and given the opportunity have played massive roles in successful season. Following that up isn’t always easy, of course, as players become well known and have to prove some level of consistency.

Here are 10 sophomores to watch this coming fall in the men’s game: 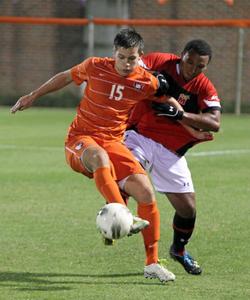 The central midfielder proved his worth at Akron last fall, doing his best to help the Zips overcome the loss of defensive midfielder Perry Kitchen to the professional level.

And while Trapp couldn’t assist in the quest for a second straight title, he was an ironman in the Akron midfield, playing in all 23 games, helping the team dictate the tempo and win possession. Another big year is expected from the Crew Academy product.

Hands down one of the finest defensive prospects in the college game, Okwuonu’s steady rise helped North Carolina to a national championship and has earned him a spot on the U.S. U20 MNT.

If he can continue to improve in central defense – a scary proposition for ACC opponents – there’s little reason to believe UNC can’t win a second straight national title.

Seven goals and five assists was an impressive return from the native of Hafnarfjordur, Iceland in his debut year in the ACC.

Another program hoping to fight their way into contention in the extremely competitive conference, Benediktsson’s second stanza is going to be crucially important to the Tigers, as he’ll likely be a much more known quantity to defenses around the league.

The tale of this sophomore is a bit unusual – Jones, a product of the Sounders Academy, played for Highline Community College last year, scoring 15 goals and adding ten assists.

After an unsuccessful trial with the Sounders first team earlier in 2012, Jones signed to attend Washington, and he’ll likely have an impact in what is technically his sophomore year in school, albeit his first at the Division 1 level.

A lot of the headlines for the Hoyas go to the offensive exploits of Steve Neumann and Ian Christianson, but the solid and versatile Rudy enjoyed a strong freshman campaign after joining from the D.C. United Academy.

With expectations continuing to rise and top talent streaming into Georgetown, it’ll be up to players like Rudy to help the team hit new heights this year.

A speedy player who can play out wide or up front, Rogers will miss the first three games of the season, serving a suspension for hitting a ref last year.

He’ll need to step up and assume a lot more responsibility this year after New Mexico jettisoned a couple of top talents if the program hopes to build on an undefeated 2011 campaign.

Perhaps no position is more difficult to adjust to as a freshman than goalkeeper. And Blake did that extremely well, back-stopping a defense that conceded only 10 goals in 25 games last year.

On the way, Blake had 15 shutouts in that stretch, and he possess the ability to perform even better this upcoming season.

One of the big surprises last year in the men’s game, Coastal Carolina gave future NCAA Tournament champions North Carolina a run for their money in the tournament.

A big reason for the team’s success was Sigurdsson’s play in the center of defense, as the Iceland native made an extremely smooth transition to the NCAA game, as he started all 22 games and picked up the Big South Freshman of the Year award.

His ability to replicate that form with the departure of Cyprian Hedrick, his central defense partner of last year, is going to determine if CCU can put in another sensational season.

Another promising defender playing in the Southeast, Zimmerman started every one of Furman’s games last year, providing a solid option in central defense.

Currently on the U.S. U20 team in Northern Ireland, he’ll play a crucial role in any success the Paladins have in 2012.

The New Zealand native and Big East Rookie of the Year faces a new challenge this fall with West Virginia’s move to the MAC. While the opposition may look different but Bevin’s importance to the Mountaineers remains the same – leading the line and finding the back of the net, which he did seven times in 2011.