Despite a pair of close results (a win and a draw), but Maryland maintained their undefeated record and held on to the #1 spot in the TopDrawerSoccer.com Men’s College Soccer Tournament National 48 Ranking. 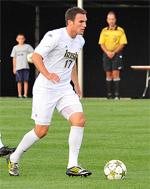 The ranking is an effort to project the postseason men's college soccer NCAA Tournament field of 48 each week, including the automatic qualifiers from every DI conference. The update is posted after reviewing all results from the previous week.

Major upsets were few and far between, with Marquette dropping out of the top 5 after a loss and a draw against #6 Notre Dame last week. Rounding out the top 5 is Akron, North Carolina, Connecticut and UCLA. New teams include Kentucky and Cleveland State.

Senior forward Ryan Finley earned player of the week awards and continues to play extremely well off the bench for the Irish. Playing two games against Marquette to wrap up the season, Finley scored two goals in the second half to lead the Irish to a 3-1 win, and in the other game of the week, scored the tying goal to secure a 1-1 draw.

GK Klay Davis, Charlotte – The netminder made 7 saves in two road shutouts over the weekend, including six in a 1-0 defeat of Saint Louis. Both games the 49ers won by a single goal.

D Kyle Venter, New Mexico – Led the Lobos to two shutout conference wins on the road and scored the game winning goal in one of them.

D Tommy Muller, Georgetown – Two steady shifts along the back line, going 180 minutes in a pair of shutouts.

D Chad Barson, Akron – The senior center back helped the Zips pick up a pair of shutouts, while also getting on the score sheet with a goal.

D Jimmy Nealis, Georgetown – Dominant left back played 180 minutes and chipped in an assist in a pair of shutout victories.

MF Ryan Hollingshead, UCLA – Scored a goal and notched an assist for the Bruins in an important 2-1 road win against Oregon State.

MF Mario Herrera Meraz, VCU – A driving force in the final third for the Rams, Meraz scored a goal and set up three as they picked up two very important Atlantic 10 wins over the weekend, including a win over Xavier.

F Ryan Finley, Notre Dame – The speedy forward scored three goals in two games for the Irish in a win and a draw against Marquette.

F Erik Hurtado, Santa Clara – Scored a hat trick for the Broncos in a 3-1 win over Gonzaga.