It couldn’t have come at a worse juncture in the season, as the Tar Heels lost the ACC title game by a 2-1 score to rivals Maryland, in what was an epic encounter delivered by the two league rivals.

A pair of freshmen found the back of the net for the Terps, as center back Dakota Edwards and forward Schillo Tshuma scored a goal in each half to lead the Terrapins to a fifth ACC title. Junior forward Robbie Lovejoy made it a nervy finish with a goal for UNC five minutes from the final whistle. 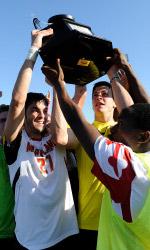 “I thought today we played a great game,” Maryland head coach Sasho Cirovski told reporters after the game. “Our best game of the year… I thought today we were very sharp in all phases of the game, and I thought we deserved a victory against one of the great teams in college soccer, and certainly the best defensive team we’ve seen in the nation.”

Coming into Sunday’s championship, the Tar Heel defense had been almost impenetrable, conceding just four goals before the championship tilt. In fact, Edwards’ goal in the 11th minute of the game was the first North Carolina conceded since October 19, a 1-0 overtime loss against the Terps in College Park.

But more importantly, the breakthrough handed the early advantage to the Terps against a suffocating defense and provided them a jolt of energy after laboring through a 2-1 win over Clemson(m) in the ACC semifinals on Friday night.

“It was a huge lift for us,” Cirovski said of the early strike. “We got the goal on a set piece from Friday night to win the game and we really worked on that aspect of our game to become more dangerous.”

Conceding first had the obvious negative impact on the game plan.

“I thought the early goal really hurt us,” Tar Heel head coach Carlos Somoano said.  “Trying to come back against Maryland, where it’s basically a home field for them, it was a tough hill to climb, it just felt like we were going uphill from that point forward.”

The pro-Maryland crowd delighted in the early tally, and after the goal, the Terps enjoyed the better play of the first half, although at times the Tar Heels saw plenty of the ball, though scoring chances were few and far between after the early breakthrough.

The second goal came in the 62nd minute for Maryland. Schillo Tshuma trapped a throw-in from Michael Ambrose, turned his defender in the box and beat goalkeeper Scott Goodwin at his near post to double the Terrapins lead.

North Carolina head coach Carlos Somoano wasn’t pleased to see his team break down at the back in that fashion.

“Very disappointing that we conceded two goals today,” he told reporters after the game. “One was on a corner kick, and one was on a throw in where they threw it in, a guy spun and shot. Those are things that we’re outstanding in, that we’ve done an outstanding job with those. So regardless of what did or didn’t happen within the course of the game, to give up two goals on set pieces, that we’ve been exceptional at all yearlong is disappointing.”

With a two-goal lead, the Terps were able to sit back and absorb any pressure the Tar Heels through their way. They kept forwards Rob Lovejoy and Danny Garcia in check for most of the afternoon, as Carolina failed to put Maryland goalkeeper Keith Cardona under any significant pressure.

That ended in the 86th minute when Lovejoy corralled a bouncing ball in the box off a failed clearance, curling home a shot that Cardona could only get a glancing hand on to cut the deficit to 2-1, and set up a possibly tantalizing finish.

But Maryland kept its nerve, and were able to celebrate at the final whistle.

“It was good that these guys kept their composure. Nobody panicked,” Cirovski said. “It was a goal out of a loose ball out of the box. There wasn’t a great buildup; we just needed to make sure that we closed it out a little bit. We hadn’t been in that particular situation all year, so we’ll be better next time.”

On the losing side, Somoano felt like his team simply wasn’t good enough on the day, losing in just about every aspect of it.

“I think we just got beat everywhere around the field today,” he said. “From a tactical standpoint, everything got thrown out the window. We didn’t do anything that we wanted to do today and we just couldn’t come up with the loose balls, the 50-50s, it just continued to go against us.”

Neither side will have time to dwell on the result – either the loss or triumph. Monday’s selection show for the NCAA Tournament sets out their respective immediate future, as both sides are bonafide national title contenders.

That doesn’t mean that the day loses any of the significance for the Terrapins.

“It means everything,” senior midfielder John Stertzer said after the game. “We set three goals this year: one to be the ACC regular season champs, one to be ACC tournament champions and national champs. So far we’ve accomplished two of our goals, and as a senior, we’re leader on the teams, it means a lot to us.”