Former Texas Longhorn senior captain Kylie Doniak returned to the 40 acres to watch her sister Mackenzy Doniak play for the University of Virginia in the Texas Invitational this past weekend. The sisters brought the Austin crowd to their feet for very different reasons.

The elder Doniak returned to visit her alma mater after a tragic accident in the Spring that left her fighting for her life. She officially received the Big-12 Conference Sportswoman of the Year award at halftime Friday evening. Kylie continues to struggle to regain her physical and mental abilities, but gave the fans a huge smile and hopeful speech. 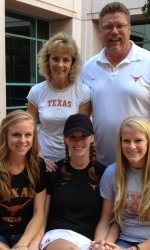 Kylie Doniak with her family

"To see Kylie walk on that field today, a field that she so dominated for so many years for our soccer team, to receive the awards that she didn't get a chance to in the Spring just makes all of our hearts feel so much better," Texas Women's Athletic Director Chris Plonsky said.

It was her younger sister who added to the Doniak scoring legacy left at Mike A. Meyers stadium as Virginia defeated Texas 3-0 Friday with Mackenzy scoring the second goal that deflated a struggling Texas defense. Now with a team-leading six goals on the year, the younger Doniak anchors a talented Virginia offense, yet the freshman earned the first start of her career against Texas.

The Longhorns began the game matching UVA's high level of play but could not maintain the pressure and consistency on the ball after the first 15 minutes. Virginia pulled ahead off a corner kick in the first half when Molly Menchel sent the cleared ball back into the net. It was Doniak and Caroline Miller who put the game out of reach in the second half, scoring beautifully crafted goals that took apart the young Texas defense.

"That's a dynamic team, an experienced team. They had opportunities and they hit the face. Credit to Virginia," Texas head coach Angela Kelly said.

Texas looked to learn from the Friday night's loss and improve in Sunday's match against the University of New Mexico (2-3-1). However, the young squad was outlasted again as the Lobos tied the game at 1-1 with less than a minute remaining and then scored the golden goal in overtime.

"The effort was there but the execution was a little misguided," Kelly said.

The Longhorns finished an early goal off a corner kick when Houston transfer Sharis Lachapelle headed the cross past a diving Kelli Cornell, but the Horns could not replicate the quality of shots seen in their recent route of Toledo.

"We need to have a killer instinct and put the ball into the back of the net," Kelly said.  "We had numerous opportunities and we need to solve that better."

A bright spot for Texas continues to be their air game in the midfield led by 6'0" freshman holding midfielder Lindsey Meyer and Lachapelle. The two newcomers are starting to capitalize on set pieces, but the attack has struggled to create much danger elsewhere.

The star of the match turned out to be the Invitational's Offensive MVP sixth-year senior forward Jordan Craig who scored both of the late goals to earn the Lobos the 2-1 victory.

"We're young and all of these games are valuable experiences for this young squad, but this certainly did not feel good," Kelly said.

The Longhorns (2-4) next travel to BYU Thursday for an 8:00 pm start time to be broadcast on Fox Soccer, then face Utah Saturday at 1:00 pm.