The Texas Longhorns(w) rebounded from two frustrating losses in a row to defeat the defending Mid-American Conference champions Toledo by a score of 3-0. Texas had failed to score in their previous two matches, both 1-0 losses first to the University of Arkansas and then North Carolina State Friday. The Longhorns outshot both opponents but failed to convert.

The squad had no problem pushing the ball across the goal line on their opportunities Sunday. The first goal came in the 39th minute when senior forward Kristin Cummins scored her third goal of the year. Set up nicely by freshman Sydney Shutter, Cummins curled a right footer over sophomore Toledo goalkeeper Kelsey Borowitz. With the 1-0 lead at the half and the defense not allowing a single shot, the Longhorns came out hungry to secure the win. 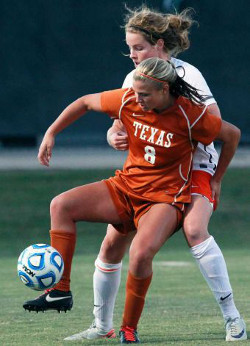 "Today was a really good relief. We know we can do everything we've been practicing in practice in the games," sophomore forward Allison Smith said. "We just got wide, finished the goals, and it was really fun."

Smith recorded her first goal of the season and assisted on the second goal of the match when she sent a bending corner into the 6'0" freshman Lindsey Meyer. The holding midfielder posted up on the 5'5" substitute goalkeeper Sam Tiongson and headed the pass into the net.

"Scoring three goals is wonderful but getting the shutout is even better," first year head coach Angela Kelly said. "Our backline has just been tremendous. Julie [Arnold] and Brooke [Gilbert] back there have been a mainstay."

The sophomore center backs shutdown every cross in the first half, and their tight defending meant that Toledo could only shoot from distance in the second half. Sophomore goalkeeper Ava Vogel had very little action, challenged just once off a free kick when she had to punch the ball amongst a crowd of bodies. Overall, Kelly was impressed with the defense's consistency in these tight games.

"They are controlling the tempo of our team and setting play from back there," Kelly said. "I'm just really proud of what they are doing."

With a steady and experienced defense, the Longhorns will have to continue to apply increased offensive pressure in order to take down their pre-conference opponents. Coach Kelly has rotated numerous players in up front and through the midfield, trying to find the players that have the scoring instinct. Two of the 21 players that stepped onto the field for a chance Sunday included the twin sisters from Kelly's home country of Canada.

"I'm really excited for Emilie [Campbell] and Chantell [Campbell] to have a breakout game, " Kelly said. "They have wonderful soccer minds. I think it's official they're acclimated to Texas."

The heat was surely a factor in the plethora of substitutions between the teams. The inserted players added a boost of energy to the Longhorns especially as many saw their first action of the season.

"We are continuing to learn from every experience and doing our best not to make the same mistakes twice," Kelly said after her second win as a Longhorn.