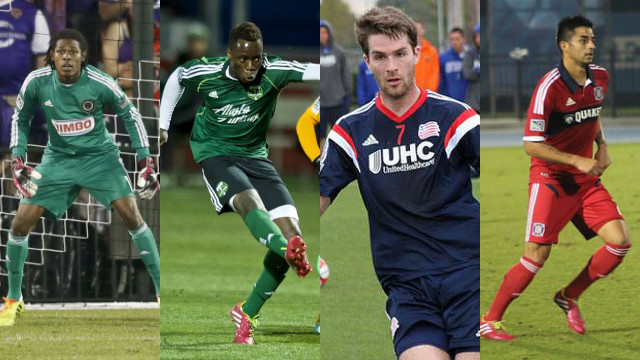 As the 2014 Major League Soccer season kicks off over the weekend, players who were competing in college soccer last fall will now get the chance to prove what they can do as a professional.

On paper, it looks like minutes may hard to come by for the majority of players who qualify as rookies. However, there is plenty of talent making the jump. Here’s a look at the chances of some of the best first-year hopefuls. 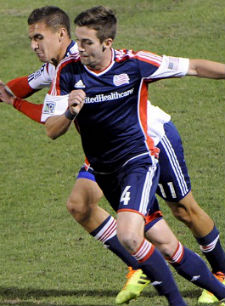 Why he’ll win: Regarded by many as the best prospect in January’s draft, Blake has all the tools to become a reliable goalkeeper at the pro level. He has some things in his game to smooth out, but if he can put it together he’ll certainly turn some heads.

Why he won’t: Before he can showcase himself in MLS, he needs to beat out Zac MacMath for the starting job in Philadelphia. That’s more of a question of when, not if, however.

Why he’ll win: Neumann appears to slot in well for the young Revs, who will find his versatility to be one of his strongest assets. Neumann most closely resembles Clint Dempsey as a second striker, and playing in front of and through New England’s outstanding midfield will provide him plenty of opportunities up top.

Why he won’t: Neumann flourished as withdrawn striker at Georgetown, but there’s a steep professional learning curve for rookies in that position. With Saer Sene and the newly acquired Teal Bunbury up top and a fleet of attacking midfielders already in place, can Neumann even get on the field? He’ll have to beat out some impressive competition.

Why he’ll win: If you’re looking for the safest bet for the award, Birnbaum may be your man. He’s as MLS ready as anyone in this field, and he enters a center back situation in D.C. wide open for competition. With a solid if unremarkable midfield in front of him and Bobby Boswell teaching him the ropes, Birnbaum could easily snap up the honor.

Why he won’t: Birnbaum still has to rise to meet the league’s speed, and it’s not a lock that he’ll find regular playing time, but you might have to look outside Birnbaum himself for the biggest factor here. United was putrid for much of 2013, and while they should be better in 2014, being thrown to the lions as a rookie is never easy.

Why he’ll win: The hulking center back has the size to snuff out fires at the back in MLS, though he’ll need time to adjust.

Why he won’t: Along with the issue of cracking the starting XI, trepidations follow Dean into the pro ranks about his toughness and defensive ability. If the mentality isn’t there, he’ll have a challenging time getting on the field.

Why he’ll win: One of college soccer’s all-time greatest players, Mullins makes the jump after slipping down into the double digits on draft day. However, if he can replicate his offensive abilities in MLS, the tendency for voters to go with the offensive players could end up vaulting him to the top of the heap.

Why he won’t: In preseason, Mullins was lining up on the right side for the Revolution, and that could trigger a learning curve for the former Terp, who spend most of his college career either up front or on the left. He could pull it off, but if he struggles with the adjustment it could dampen his Rookie of the Year chances.

Why he’ll win: A pacey outside back with the ability to whip in a cross is somehow a rarity in MLS, but Franco fits that bill and more. The UC Irvine product was the first round pick for Fire in search of a true outside back who could fit Frank Yallop’s style of play.

Why he won’t: There are three rookies from the Fire on this list, which is only going to split the votes between them.

Why he’ll win: The U.S. youth international is a swiss army knife of a player. He can play nearly any position on the field and adjust pretty quickly to his situation. Allen’s versatility will come in handy to the RSL coaching staff in their first year in charge.

Why he won’t: Not having a position can work against a young player as he may never have time to learn the nuances of one spot on the field. He is also walking into an RSL team that is looking for depth more than it is looking for a star.

Why he’ll win: As a cool, calculating midfielder, Shipp enters MLS with versatility in tow. He pulled the strings for Notre Dame, but he made strides as a two-way player in 2013. His technical level and ability to read a game are second-to-none, and feeding Mike Magee all day can win awards on its own.

Why he won’t: One look at Shipp is all it takes to question whether he can hack it day-in, day-out in the league. Notre Dame generously listed him at 5-foot-9, 145 pounds, and MLS is not light on size. Can he stay healthy? There isn’t much of a precedent for young, small central midfielders blowing the door off the league’s hinges out of college.

Why he’ll win: A versatile defender who can play either on the right side or in the center of the park, Miller doesn’t dazzle but is a solid and steady player who gets the job done at the back. He has experience and ability that should allow for a seamless transition to the pro ranks.

Why he won’t: Like other rookies, he’ll need to earn his time on the field. Judging by preseason, the odds look good that Miller will earn some playing time as an outside back. The question then becomes, can he do enough to warrant top rookie honors?

Why he’ll win: Thompson became the Quakes’ first homegrown player in January, and you’ll find few questioning the move. After just one season at Indiana, Thompson proved his dribbling ability, eye for angles and brought an excitement level few can muster. If given space to grow, Thompson can flourish in MLS, and he’s ready to begin even now.

Why he won’t: Thompson is a smaller, more technical player who thrives on pass-and-move soccer. San Jose has traditionally attracted brusque players and coaching styles content to play over the top, and that isn’t Thompson’s game. Plus, does Mark Watson have the courage to hand that much playing time to an 18-year-old?

Why he’ll win: Size matters in MLS and it’s sometimes the cornerstone of what coaches look for when selecting squads. If Cochran can adjust to the speed of the game in front of him, he’s the kind of defender who could jump in and contribute right away.

Why he won’t: If Cochran can’t adjust to the speed of the game, he’ll be hard pressed to contribute enough this season to see significant minutes.

Why he’ll win: The Sounders appear to be clearing room for him with some of the recent moves, which may open up time for the rookie somewhere on the left side of the field. Kovar serves a wonderful ball and has some pretty clean footwork.

Why he won’t: The pace of the game in MLS and the pace of play at Seattle’s home stadium are the most difficult obstacles for rookies to clear. If Kovar can adjust to those, he could have a shot at making some impact during his rookie campaign.

Why he’ll win: The injury to Bright Dike in preseason leaves TFC without a pure target forward up front, and it’s a role that Hamilton could play. If he slots in up front next to Jermain Defoe or Gilberto, he could poach enough goals to sneak into the race.

Why he won’t: He’s 18 years old, and it remains a tough task for him to get the minutes needed. He’s much more likely to spend most of the season playing with the Wilmington Hammerheads, TFC’s USL-Pro affiliate.

Why he’ll win: Over his four years with Stanford, Koval was one of the most consistent performers from one game to the next at the collegiate level. He is strong on the tackle and tremendous in the air - two assets that sit well with most MLS coaches.

Why he won’t: Koval needs to find playing time in a crowded Earthquakes midfield, which may not come until later in the season. He also plays a defensive midfielder position that never receives much attention during awards season.

Why he’ll win: Tshuma’s athletic bonafides are well documented. He’s one of the few prospects in this draft class with legitimate ability on the wing, and while it’s not obvious how he’ll fit into Caleb Porter’s schemes, Tshuma is one of the most unique rookie prospects available.

Why he won’t: Was Tshuma’s sophomore season at Maryland an aberration? The Timbers certainly hope so. After an incendiary freshman year, Tshuma slowed down considerably in 2013, and whether or not he’s MLS ready is up for debate. Further, can he hack it in Porter’s possession-based battle plan? That much isn’t clear.

Why he’ll win: With Chivas a significant wild card this year, the chances of McNamara playing significant minutes is higher than for some other rookies. He has the soccer intelligent to make things happen in the final third, which will certainly attract attention.

Why he won’t: Even if McNamara plays, Chivas USA is something of a mess. It would be hard to see voters recognize someone on a team that struggles as much as Chivas USA might.

Why he’ll win: The Colorado Rapids showed last year that the club is willing to give rookies a chance to prove themselves against the big boys. Unfortunately for Hairston, there is a new coach in charge (is there a coach in charge?), so that mentality may change. His game is a bit raw, but he has qualities that could be sculpted into a quality piece for any midfield in the league.

Why he won’t: He’s young at only 19 years old and there is growing momentum to the notion that Shane O’Neill could be moving into the midfield, which would significantly reduce his playing time.