The first two rounds of the 2014 MLS SuperDraft are in the books – and the theme of the event appears to be everyone needs a defender. Sixteen of the first 38 picks were listed as defenders, which left many attacking players scratching their heads at the end of the day on Thursday.

There are still two rounds remaining in the draft, which will be held on Tuesday. Here is a look at some of the best talent available for the final 39 picks of the 2014 MLS SuperDraft. 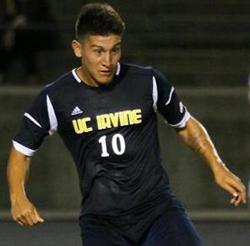 One of the biggest surprises on Thursday was Cal Poly midfielder George Malki being selected ahead of teammate Mackenzie Pridham. Pridham, the two-time Big West Offensive Player of the Year, was invited to the MLS Combine after a strong season with the Mustangs. The forward has good instincts and can finish with either foot. He does not have explosive speed, but he is physical and competes hard. He could be a valuable piece for a franchise in search of depth at the forward ranks and has the tools to develop into a starting player in the future. Pridham was just one of many forwards who were curiously overlooked through the first two rounds as teams elected to go after defenders with most of the early selections.

The best attacking midfielder from college soccer was overlooked in the first two rounds of the draft. It is not much of a surprise though, as MLS tends to look to international avenues to fill that position and there has been very little success to speak of with players transitioning from college to MLS in that role. Quinn has the MLS physique and the skill to make it work, so he could be a significant selection on Tuesday for one team.