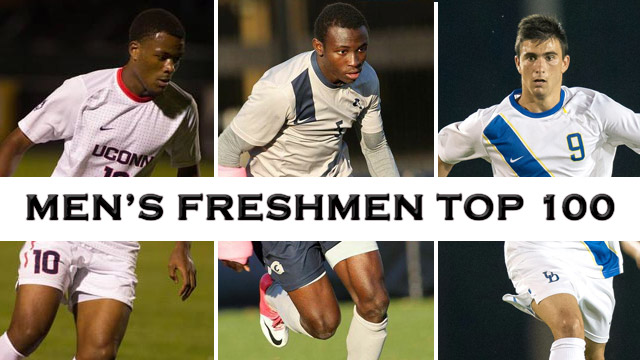 The TopDrawerSoccer.com year-end college awards rollout continues with the reveal of the Freshman Top 100 list. After snagging a place in the TDS Freshman Best XI thanks to a hot finish, Connecticut forward Cyle Larin rounds out 2013 as the nation’s No. 1 freshman.

Larin immediately stepped into the breach for UConn with a team-leading 14 goals and three assists to quickly become the program’s primary and most dangerous attacking threat. Larin was instrumental in helping the Huskies to the quarterfinals of the NCAA tournament with six goals in the team’s final seven games. He also set up UConn’s lone goal in a 2-1 loss to Virginia that ended the season.

Dynamic Washington attacking midfielder Cristian Roldan snapped up the No. 2 spot after leading Washington deep in the NCAA tournament with seven goals and five assists. At No. 3, Georgetown’s Joshua Yaro clocks in as the nation’s top freshman defender following a sterling season in the nation’s capital. Yaro helped hold down the country’s No. 2 defense in goals against average (0.46) and managed to start 17 games on a back line crowded with talent.

Virginia’s Jordan Allen and Delaware’s Guillermo Delgado round out the top five. Allen, one of just three Cavaliers to start all 24 games in 2013, guided Virginia to its 11th College Cup with three goals and five assists. Delgado was the highest scoring freshman in the nation with 15 goals this season, which was also good for fourth nationally.