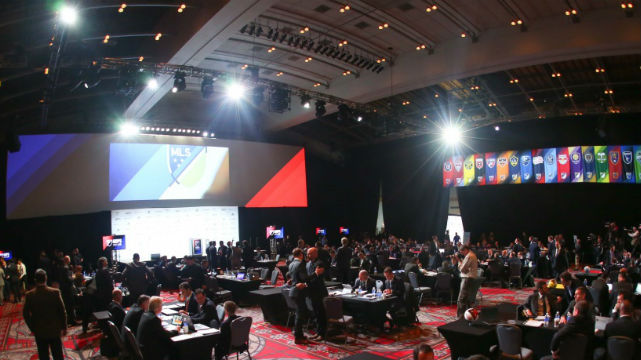 Over the past week, pro hopefuls who had played men’s college soccer learned the next step in their careers if they were lucky enough to have their name called in the MLS draft.

For a league whose executives spout the ambition to be one of the world’s best in roughly seven years, it’s an exercise that becomes more and more futile each year.

Instances like this one occur, where a team doesn’t realize that the player they picked doesn’t have American citizenship and would require an international roster slot. Teams claim not to put too much stock in the player combine, yet at last week’s SuperDraft, those who performed well in Florida had their name called earlier, while others didn’t. Scouting is scattershot, varying from team to team. There’s a sense that athletic traits are more important rather than soccer skills. And it’s understandable too, because the impact of college players seems to become more and more minimal – especially right away.

With each passing year, there seems to be more and more reason to abandon the draft in its current formant. Clearly, MLS desires it as a marquee event that drives media coverage like its North American brethren. But in those instances, fans that consume leagues like the NFL and NBA know who those players are because of the popularity of their collegiate counterpart. In the case of NCAA men’s soccer and MLS, some dedicated fans do research, but not a lot of people are watching college soccer in the fall.

Of course, this isn’t a call to prohibit college players from making the jump. The coverage of pro academies across the United States means that players will always sneak through the cracks and end up in college. USL Pro has exploded, more than doubling in size, meaning that there are plenty of spots for these kids somewhere.

Rather, it’s more about re-thinking the approach to distributing players from college into the pro ranks. Opening the college candidates to a free market would be one viable option, one that MLS would likely never take because of its instance on player control and the concept of promoting parity (ie, the worst team gets the first pick in the draft). But wouldn’t it be nice if the teams who did the scouting work could just sign players as they saw fit? USL Pro and NASL teams do it. MLS should be no different.

Even with the unlikely suggestion of a free market, maybe MLS could come up with other alternatives. Maybe yet another sort of order, where the worst teams in the league are allocated more money under the cap to sign the best players. Or even just making discovery claims. Or just have the draft via conference call.

Eliminating the draft would be somewhat unfair to the players, who get recognition for solid college careers in the current format. That would be a bummer, although players would hopefully be hungry to receive accolades and recognition for pro accomplishments instead. And redoing the draft could see players end up in situations where technical staffs have slightly more interest in seeing them succeed and contribute.

Regardless of what happens, something should be altered. Given the rise of academies, top players heading to Europe instead of going to college, there’s not much super about the SuperDraft these days. It would be a wise move for a re-think to be done. With a new Collective Bargaining Agreement being discussed, now’s the time.