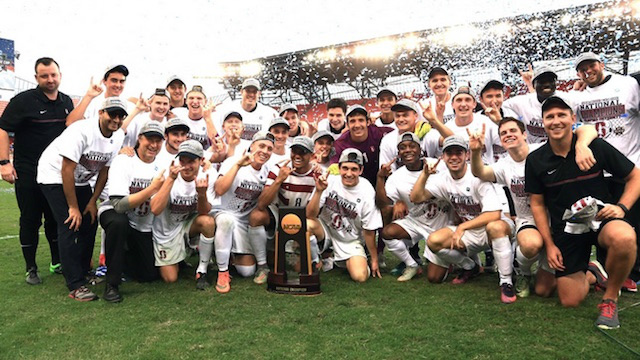 HOUSTON — Just call Stanford’s Andrew Epstein the finisher. Because there may be no better big-game goalkeeper in College Cup history.

For a second consecutive year, Epstein was immense with the furnace at its hottest. In Sunday’s College Cup final, the junior Stanford keeper recorded back-to-back saves to hand the Cardinal a second consecutive national title after 110 scoreless minutes against Wake Forest. Epstein, of course, was an integral part of the 2015 national title team and recorded two big saves in that year’s semifinal against Akron. In that sense, his performance Sunday was more of the same.

Now, the Cardinal are just the sixth program in history to win back-to-back national titles and the first since 1995 (and third ever) to win it without scoring a single goal in the College Cup. In fact, Stanford didn’t give up a single goal in the entire NCAA tournament and finished the year with a consecutive shutout streak at a clean 560 minutes.

After a chess match yielded no goals through regulation and overtime - and in reality few clear-cut chances either way - the game plunged into penalty kicks. This has become something of a tradition for the Cardinal, who plunged into the nervy blender of penalties for the third time in four College Cup games since last year.

When Stanford’s Tomas Hilliard-Arce blasted Stanford’s fourth effort high over the bar, Epstein had a clear task in front of him.

“I was thinking, ‘Alright, I have two chances to make it up,’” Epstein said.

He didn’t get the first. Jon Bakero’s powerful effort beat him, and Stanford’s Corey Baird made the next one via a gutsy chip down the middle to throw it to Wake Forest’s Hayden Partain with a chance to win a national title. All that stood between the No. 2-seeded Demon Deacons and their first title since 2007 was Epstein. And as Partain made his run-up, Epstein noticed something.

“He was just a little tighter so it was harder for him to hit it across his body,” Epstein said. “So I felt confident about going to my left.”

Epstein used the quick observation to deduce Partain was going to his left, and Epstein leapt off his line and pushed Partain’s effort to the side. The Stanford bench erupted, but that only leveled penalties. When Sam Werner hit the next for Stanford, Wake Forest’s Sam Dunwell strode to the spot with a buoyant Epstein staring him down.

Unlike the last kick, Epstein didn’t catch a tell off Dunwell. He guessed the opposite direction - low and to his right - and Dunwell didn’t get all of it. His kick didn’t reach the post, and Epstein fell on it to prompt a mad dash to the junior penalty specialist. The match also gave Epstein the lowest career goals against average in the history of the tournament.

“It’s a closed environment skill just like free throw shooting or golf putting or something like that,” Gunn said. “We worked hard on playing and trying to score goals. It’s much easier on the heart and the gray hairs. But (penalties) are part of the game, and while it’s how games are decided we’re going to practice it.”

The game itself wasn’t exactly a monument to the occasion. Both teams cagily picked their way forward, looking to exploit openings that were never open for very long. Stanford’s center back duo of Brian Nana-Sinkam and Hilliard-Arce were a wrecking ball, smashing apart one Wake Forest attack after another. The Demon Deacons, who typically push the ball on the ground a bit more than Stanford, were unable to unlock a Stanford defense that was literally unbeatable this postseason.

As far as Wake Forest Bobby Muuss was concerned, though, there was more at play. The choppy, sandy field surface has been a point of contention for every team all weekend. None made excuses for it winning or losing a game on its own, but it had a noticeable effect on the playmaking ability of all four teams here. Muuss didn’t suggest the field was to blame for the outcome, but he was sure to express his dismay at its lack of quality on such an enormous stage.

“I think it’s disrespectful to college soccer,” Muuss said of the field surface. “What happened this weekend, I think it’s a catastrophe for our game. We worked extremely hard as a coaching body to do everything we can to promote the brand of college soccer that a lot of people like to knock down. I know we take great pride in trying to do things the right way, or at least what we feel is the right way. The field didn’t win or lose the game for us today. It just made for a pretty sloppy NCAA final four, which is supposed to be the pinnacle of college soccer.”

One side effect was perhaps the game’s physicality. There were an astronomical 40 fouls over the game’s 110 minutes of life, and the referee only pulled his yellow card from his pocket three times. That set the tone for a match that never found any sort of coherent rhythm and struggled without a goal to lift the urgency.

Stanford, which has been grinding out tournament games with unerring success for the last two years, found a way to do it again. And now the Cardinal can put themselves in a pantheon with the great dynasties of men’s college soccer.

“It’s where you want to be and with the people you want to be with,” Epstein said. “I’m just happy right now. When you step out on a soccer field, you’re hoping to put yourself in a position to be playing today. And then when you step out today you’re hoping to be on the winning side at the end. We’ve done that. There’s nothing more you can ask for.”