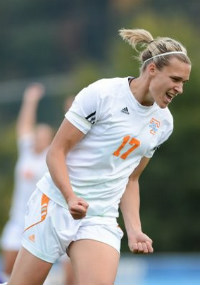 Next up, a look at ten of the best forwards in women’s college soccer – in no particular order:

Janine Beckie, Texas Tech, Sophomore: The Colorado native put together a dazzling first season in the women’s game, scoring 14 goals and notching five assists, along the way to picking up a slew of accolades. That included the Big 12 Rookie of the Year, NSCAA Second Team All American, scoring the third most goals amongst freshman in the nation. Her outstanding season earned her a call-up to the U.S. U20 Women’s National Team this year.

Jonelle Filigno, Rutgers, Senior: Few college players have the same kind of international exposure at the highest possible level as this Canadian forward. With appearances in the 2008 and 2012 Olympics – winning the bronze medal at the latter – Filigno has 42 caps and counting with the WNT. She has the skills to justify that pedigree, as she’s a smart finisher who bagged 15 goals last year for the Scarlet Knights.

Kristen Hamilton, Denver, Senior: After three very solid seasons for the Pioneers, Hamilton will look to leave her name in the record books her senior year, as she currently sits tied in fifth for career points (98), fifth in career goals (37) and sixth in career assists (24). She’s much more than just her numbers, as she helps the rest of her team raise their game when she’s on the field, and is a special player in the final third.

Maya Hayes, Penn State, Senior: One of several players with international experience on this list, Hayes had a monster sophomore year, scoring 31 goals in 2011. She didn’t reach the same total a year ago thanks mostly due to World Cup duty, but still scored 16 goals in 20 games. Her combination of pace and power is nearly impossible to stop – most teams can only hope to slow her down.

Kealia Ohai, North Carolina, Senior: A year ago, Ohai was a part of the U20 Women’s World Cup winning squad, and then returned to help the Tar Heels on its quest to yet another national championship. One of many offensive options, the speedy forward still managed nine goals in 17 games last season en route to a national title.

Katie Stengel, Wake Forest, Senior: The top recruit has lived up to her bill all three years for the Demon Deacons, transforming into a prolific goal scorer and three-time NSCAA All American, the first in the soccer team’s history. A prolific striker with 44 career goals in 63 games, Stengel is one of a handful of college players with a legitimate shot at making her mark on the full WNT one day.

Rachel Tejada, Illinois State, Junior: The record-setting goal scorer didn’t reach quite the same heights as she did in 2011, when she tallied 21 goals her freshman year. But 18 goals and 10 assists is nothing to gloss over, even in the Missouri Valley Conference. Tejada has to fight through double teams and triple teams all season, and has shown her quality again and again.

Chioma Ubogagu, Stanford, Junior: Paired up extremely well with Courtney Verloo after returning from the U20 World Cup, Ubogagu offers a dynamic speed option that can get in behind defenses. She hasn’t put up the same kind of lofty goal totals as some of her other peers on this list, but she has the game-changing speed that helps her secure a spot in the top 10.

Taylor Uhl, Stanford, Junior: After bagging 35 goals in two seasons with Minnesota, Uhl transferred recently to the Cardinal, adding another potent weapon to the team’s strike force. Her goal total may not be as high as it was in 2012, but she’s going to have a huge impact out in Palo Alto and in the Pac-12.

Hannah Wilkinson, Tennessee, Junior: A talented forward with an impressive international pedigree, Wilkinson competed at the 2012 Olympics and U20 World Cup with New Zealand prior to arriving as a sophomore at Tennessee. There, she made an impact despite playing catch up, scoring eight goals in 16 appearances and picking up All American honors.