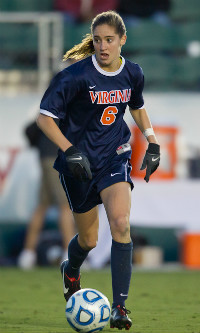 Next up, a look at ten of the best midfielders in women’s college soccer – in no particular order:

Jessie Ayers, Colorado College, Junior: A versatile player who might not receive the same kind of attention playing at a smaller school, Ayers is the two-time Conference USA Offensive Player of the Year and Midfielder of the Year. Add in her All American status and it’s impossible to leave her off this list. Most of what Colorado College does offensively runs through her.

Morgan Brian, Virginia, Junior: One of a few players on this list to miss a chunk of the 2012 season because of U20 World Cup duty, Brian is a tremendous two-way midfielder who can contribute at both ends of the field. Her scoring totals were a bit down because of the time she missed, but that doesn’t accurately reflect her quality, as she showed by sparking to life during UVA’s run to an ACC tournament championship.

Daphne Corboz, Georgetown, Junior: A creative and technical hub on the field, Corboz is a very fun player to watch with the ball at her feet. Possessing tremendous vision and awareness, she’s not the most physically imposing but pops up in the right spots and has a nose for goal, as evidenced by her 18 tallies and eight assists last season.

Vanessa DiBernardo, Illinois, Senior: Despite being away for a chunk of the season at the U20 World Cup and only playing 16 games, DiBernardo led the Illini in goals scored and points, with eight goals and five assists during that stretch.

Julie Johnston, Santa Clara, Senior: The captain of the victorious U20 WNT in Japan, Johnston’s quality hasn’t escaped the notice of USWNT coach Tom Sermanni, and the Santa Clara standout has already been capped by the full team. A central midfield stalwart, she led the Broncos in scoring with eight tallies on the year, and is looking to end her college career with a bang.

Sarah Killion, UCLA, Junior: A bit more offensive-minded than her fellow Bruin also on this list, Killion is a hard worker who puts pressure on the opposing defenses with her ability to pick out passes all over the field. Another U20 winner from a year ago, she scored three goals and added six assists in her shortened 2012 campaign.

Sam Mewis, UCLA, Junior: Mewis is a easy to spot because of her height, but that hardly defines her game. The Lone Ranger of the Westwood pitch has soft feet and a smart mind that shows with her ability to read passing channels and control the pace of the game.

Cari Roccaro, Notre Dame, Sophomore: Like other top players, Roccaro played every position – save goalkeeper – as a freshman last year, and was pretty darn good at each one. She’s probably best in the midfield, however, though with the addition of top recruit Morgan Andrews this fall, could end up playing either side of the field. No matter where she ends up, she’s got all the tools to be one of the best players in the nation.

Meghan Streight, Texas A&M, Junior: In the past two seasons at A&M, Streight has played very well in both midfield and defensive roles, and has lived up to her billing as a former Gatorade Player of the Year for Texas and a top recruit. She provides stability to the middle of the park and helped the Aggies post some impressive defensive numbers a year ago.

Danica Wu, Ohio State, Senior: An ankle injury limited Wu to 12 appearances in 2012, but that doesn’t detract from her quality, as she earned a look from the Canadian Women’s National Team last December. With 58 appearances in three seasons, Wu will look to lead the Buckeyes to new heights in 2013 and solidify her chances at the next level.