First up, a look at some of the best defenders in women’s college soccer – in no particular order:

Natasha Anasi, Duke, Senior: The 2011 ACC Defender of the Year can play in defense or midfield, and was deployed as a center back for Duke in 2012. She is a lockdown option on the field and can matchup with any of the top forwards in the women’s college game. 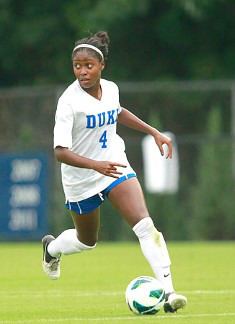 Whitney Church, Penn State, Junior: Another impressive young center back, Church made the move to the back line last year after spending a significant chunk of her time in the midfield as a freshman. She moved without a beat, and made enough of an impression to land on this list ahead of her third year in school.

Abby Dahlkemper, UCLA, Junior: In two seasons, Dahlkemper has cemented her status as one of the best shutdown defenders in the country. And although the Bruins fell twice at crucial junctures of the 2012 season against conference rivals Stanford, that shouldn’t diminish how good this two-time All American has been and will continue to be in 2013.

Marissa Diggs, UCF, Senior: Strong, athletic and quick, Diggs anchored the UCF defense last year, and will look to cement her status as one of the best center backs in the country this upcoming season. Earned all sorts of individual accolades, including Conference USA Defender of the Year and NSCAA Second Team All American.

Crystal Dunn, North Carolina, Senior: With the ability to play pretty much anywhere on the field except goalkeeper, Dunn would fit on any top 10 positional list. The Tar Heel standout played as a center back for parts of last year, broke into the full national team as an outside back recently, and was also named the 2012 ACC Defender of the Year. While she may not play in a defensive role this coming season – an attacking midfield role she excelled at during the final stretch of last year more likely – she’ll make a significant impact wherever she ends up for the Tar Heels.

Hanna Gardner, North Carolina, Sophomore: Injuries opened the door for Gardner as a freshman in 2012, as she was recruited to UNC as a walk-on and she seized her opportunity. A dazzling campaign saw her finish second on the team in minutes played on the way to the team’s national championship, adapting and exceling on the team’s three defender back line. She’ll no doubt have to win her spot all over again, but looks like she could be the latest gem churned out by the Chapel Hill program.

Jaelene Hinkle, Texas Tech, Junior: Who doesn’t love a promising left back? Hinkle arrived to the Red Raiders with much fanfare, and for the last two seasons, she’s delivered, with good one-v-one defending skills complimented by blazing speed. She gets forward and joins the attack quite often, as evidenced by her team-leading five assists in 2012. Look for an even bigger year from her this fall.

Kassey Kallman, Florida State, Senior: The Seminoles missed Kallman for a handful games at the beginning of the season, as she was busy with U.S. U20 World Cup duties at the start of the 2012 slate. Her return saw her jump right back into the starting lineup, playing every minute on the way to another College Cup appearance. How good was the Seminole defense? The back line set the 13th longest shutout streak mark, going more than 900 minutes without conceding a goal, with Kallman of course playing a starring role upon her return.

Laura Liedle, Stanford, Sophomore: Another top outside back who can play on the left – or, like other top players, almost anywhere on the field – Liedle put in a dominant freshman year. With seniors Alina Garciamendez and Rachel Quon graduating from the Cardinal back line, the pressure will be on for her to replicate her first year success as one of the more experienced members of the squad. There’s little doubt that she’ll replicate that success in the coming season.

Rachel Lenz, Texas A&M, Senior: A fearsome center back at the heart of the Aggies back line, Lenz has provided consistency and dominance all three years for A&M. She is a handful for every forward to try and contend with, has good height (5-foot-8) and speed to keep up with attackers all season long.