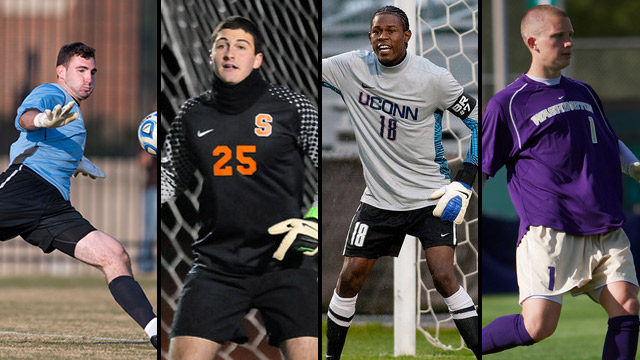 First up, a look at some of the best goalkeepers in men’s college soccer – in no particular order.

Andre Blake, Connecticut, Junior: Few would contest the notion that Blake is the best shot stopper in the country. Possessing superb athleticism and reflexes, the Jamaican already has 27 shutouts through two seasons with the Huskies. This year presents another chance for Blake to prove his consistency and erase any doubts scouts may have about his abilities at the professional level. 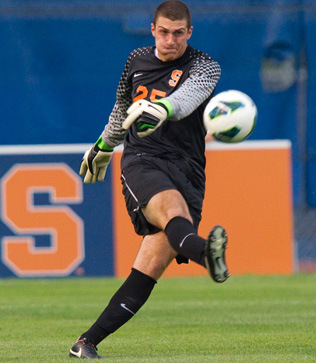 Alex Bono, Syracuse, Sophomore: The Big East Rookie of the Year, Bono is a mixture of solid fundamentals, good size and poise in goal that belies his age and experience. As a freshman, Bono made 79 saves and picked up 10 shutouts, and put in a few memorable performances in the NCAA Tournament last fall as the Orange advanced to the third round.

Rafael Diaz, St. John's, Senior: Last fall was a bounce back season for Diaz after his 2011 was cut short thanks to an injury. The native of the Dominican Republic, Diaz is slightly undersized at 6-feet-0, 160 pounds, but makes up for it with smart positioning and quick reflexes. He made 58 saves and notched eight saves in 19 games in 2012.

Jeff Gal, Virginia, Sophomore: The redshirt net minder announced himself on the national stage at the end of last season, making some crucial saves in helping Creighton to the College Cup. He split time in goal last year, but in 15 starts made 57 saves, had seven shutouts and a record of 13-1-1. Since the end of the season, Gal is in the midst of a transfer to Virginia, as incumbent goalkeeper Spencer La Cevita is coming off two offseason hip surgeries. So Gal will have to prove himself again at a new place, but is certainly talented enough to do so.

Tomas Gomez, Georgetown, Junior: A member of the U.S. U20 player pool, Gomez battled through a shoulder injury through a part of last season but steadied himself to help backstop the Hoyas’ run to the national championship. While he is prone to the occasion gaffe, Gomez is a solid shot stopper and will take on an even bigger role this season after the loss of Georgetown’s senior leaders.

Ashkan Khosravi, UC Riverside, Sophomore: An Iranian youth international, Khosravi has one of the best tales in college soccer circles, and has the talent to force himself onto the national saves. His side fizzled out after a strong start to the season, going 3-8 following victories in its first seven games of 2012, but Khosravi showed signs of yet another talented player between the posts who will look to reinforce that this season.

Charlie Lyon, Marquette, Junior: The rising junior played every minute of the 2012 season for a rapidly improving Marquette program, with Lyon one of many reasons for last season’s success. Possessing a big frame, his 87 save and 10 shutouts were an impressive return statistically.

John McCarthy, La Salle, Senior: The soon to be fourth-year starter has put together an impressive resume thus far in his college career, despite not playing at a prominent power. He’s led the nation in the past in saves, making 143 as a sophomore, before amassing 114 his junior year in 2012. He has a chance to make a final impression and show that he has pro potential in his final year, something that wouldn’t be a huge surprise.

Tyler Miller, Northwestern, Junior: Another ‘keeper who has a very imposing frame – Miller stands at 6-foot-3, weighs in at 195 pounds – the New Jersey native was the First Team All-Big Ten goalkeeper, playing every minute of 2012 after assuming the starting job as a freshman the year before. While he benefits from playing behind a strong defense, Miller has shown the ability to make big saves in big games.

Spencer Richey, Washington, Senior: The former U.S. U17 MNT international does a lot of the little things that don’t show up on the stat sheet extremely well – organizes his defense, is an on field leader and distributes the ball better than most ‘keepers in the nation. To go with that, he’s a solid shot stopper with good fundamentals and positioning.