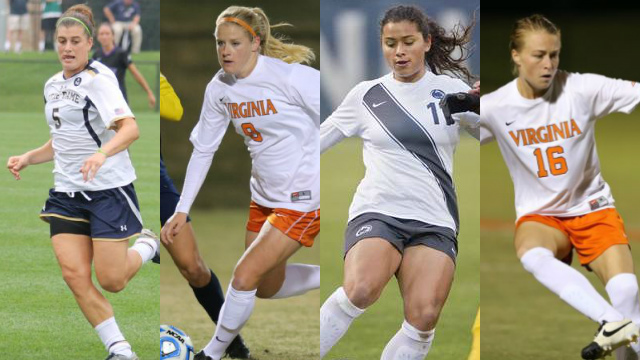 This week marks the return of the NWSL draft, as teams in the fledgling women's soccer league plucks the cream of the crop from the college ranks.

Last week, the league announced its list of players eligible for the draft. Below is a ranking of the top 30 prospects who will be available on Friday. Please note that certain players are excluded because of their lack of inclusion on the draft list (Ashley Meier, Jordan Coburn, Rebecca Wilson) while Claire Faulknor is expected to join FC Bayern Munich later this week.

Generally viewed as the presumptive top pick in the draft, Sonnett also doubles as arguably the best player in a class viewed as a bit light in some areas. A tough defender with good mobility and athleticism, she excelled over the past two seasons in particular at the heart of the UVA back line. Looks all but certain she’ll trade Charlottesville for Portland as she aims to make a late run at grabbing a spot on the USWNT Olympic roster. (Highlights)

After leading Penn State to the promised land, “Rocky” seems set on starting her pro career on U.S. shores after surveying overseas opportunities. The Costa Rican international is a dogged central midfielder with the kind of technical prowess that should have coaches jumping to grab her in the top three picks. At times she made the college game look easy, and is one of a few players available who can make a difference in 2016. (Highlights)

The experienced U.S. youth international enjoyed a stellar ACC career, leading Virginia to two College Cups, breaking Cavalier records on the way. Speed and dynamism are two obvious traits to her game, and she’s a lock to be selected somewhere in the top five, if not top three. Injuries slowed her during the 2015 campaign, but as long as she stays fit and healthy, she’s good enough to make a huge dent in NWSL defenses. (Highlights)

A versatile player who played as a forward, midfielder and at the back during her career in South Bound, the U20 World Cup winner settled in primarily as a central defender towards the end of her DI career. Athletic and tidy on the ball, a key for Rocarro’s success will be picking a spot on the field and settling into it. Like the trio above her, she could make a significant contribution during the upcoming season.

Already a full member of the New Zealand national team, Bowen excelled during her four years at Chapel Hill, showcasing a versatility to play in both the midfield and along the back line. Given her experience, she should be almost a certain first round pick if teams can accommodate her international status. Rumor has it that she may not end up staying in NWSL, although she is included in the list of players eligible for the draft. Certainly has the tools to continue her playing career at a high level and would be a miss for the NWSL.

Easily the premier left-sided player available in the draft, Pickett’s been a force for the Seminoles over four seasons, either as a left back or left midfielder. Given the difficultly to plug players in on the left side, it would be a surprise to see Pickett fall out of the first round, especially with new club Orlando Pride establishing its presence in her home state. The track record of Florida State’s success in producing pros lends strong credence to Pickett’s status heading into this draft.

While injuries may have slowed her up in the 2015 campaign, Farquharson’s accomplishments in a conference as good as the Pac-12 shouldn’t escape the notice of teams looking to add attackers. Farquharson, who finished her career as the second leading scorer in program history with 44 tallies, piled up the individual accolades, including back-to-back First-Team All-Pac-12 honors as a junior and a senior. A deceptive, technical and creative forward who earned a look with the U.S. U23 WNT in 2014, she needs the right system that will allow her to play to her strengths in order to continue to develop towards her ceiling.

The Canadian international has enjoyed a stellar career in Lubbock, nearly reaching the 60 goal mark and piling up the international accolades. Back-to-back Big 12 Offensive Player of the Year, named to the All-Big 12 first team all four years, her next step in a blossoming career could be as a first round NWSL draft pick. A dual citizen of the United States and Canada, the striker could pack some scoring punch in 2016. Speed has been a major factor to her success so she’ll

A prolific goal scorer during her three seasons with the Red Storm, Daly is a dynamic attacker who is lethal in and around goal. The U17 youth international for England nearly averaged a goal per game during her time in the Big East, although she needed more than 300 shots to amass that total. As long as she can maintain productivity, she could being an impact player in the league here, or perhaps head home to England if it doesn’t work out. (Highlights)

It was the year of intrigue for Westphal, named the SEC Defender of the Year despite the team’s defensive form not quite at the same heights of 2014. Still, there’s little doubting that with her versatility and technical ability, Westphal is a promising prospect. She logged more than 2,000 minutes every season along the Gator back line, and could play centrally, on the outside or perhaps even in the midfield at the next level. Serves in a good ball from set pieces and is a good decision maker that seems likely to come off the board in the first round.

One question hovering over a draft is which Rutgers senior central defender will make the better pro. Reed demonstrated consistent excellence over the last two seasons that lends credence to the belief her game would work at the next level, though. Regardless of which Rutgers defender is no better, there is no debate that Reed has been one of the best college center backs over the past two seasons, earning Big Ten Defender of the Year honors in 2014 and All Big Ten First honors last fall. Whether she can pull off the same thing at the next level is the next task at hand for her.

One of the most athletic attacking players in college soccer, that asset is likely to propel Williams into the first round despite the fact she wasn’t quite as elite a finisher as some of the other players available in the draft. Williams is a classic No. 9 who can play back to goal and find a way to outpace defenses in behind. In order for her to blossom, improving her finishing is key, as well as becoming an all-around option for a pro team. (Highlights)

Smart, cerebral center back who paired extremely well with Reed at the heart of Rutgers’ run to the 2015 College Cup. Makes good decisions both in defending and with possession, and her size (5-foot-6) isn’t going to be a huge disadvantage. Demonstrated consistency over all four years at school, although her breakout year came in 2015 and she’ll need to keep trending upwards to become a successful in the NWSL.

An overseas success story on collegiate shores, Galton is a three-time CAA Player of the Year who accumulated a total of 122 points during four seasons at Hofstra. Like Daly, she carries international status that could make teams think twice about selecting her earlier in the draft, and while she demonstrated consistency, the CAA doesn’t have the same rep as other conferences. Galton could end up sticking however, as she’s a player who can both score and create in the final third. Not only that, she’s a left-footed player who could end up playing just about anywhere on the field, from outside back, midfield or up front.

Forming a tremendous partnership in central midfield with Isabella Schmid, Hahn’s abilities rarely showed up in the score sheet, though there’s no doubting how crucial she was to Florida State’s success during her four season in Tallahassee. The Florida native, converted from an attacking role, settled into a holding midfield spot with ease, playing more than 100 games in the ACC, all while showcasing excellent technique, passing range and a high soccer IQ. Individual awards certainly haven’t been coming her way at a high rate, though Hahn deserves a look after a quietly excellent career.