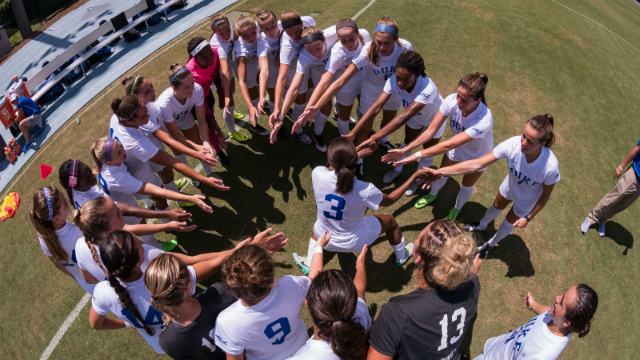 The women’s Division I season officially begins today. Check out the top five matches to watch over the weekend.

Two College Cup squads squaring off against one another on the opening day is not a bad way to begin the season. The Hoyas and Mountaineers tend to see each other on a yearly basis given the regional proximity, and both are coming off banner 2016 campaigns. It’s a good test for the two sides as they look to rebuild, and dangerous returners are back. Georgetown’s midfielder Rachel Corboz will look to lead the attack in her final season, while Elizabeth Wenger emerged as a solid force at the back. For West Virginia, a lot of the focus will be on departing stars Kadeisha Buchanan and Ashley Lawrence, though WVU has plenty coming back. Carla Portillo, Michaela Abam, Bianca St. Georges and Rylee Foster give the team a formidable spine, and a tall test for Georgetown.

With the two sides not slated to meet once again during the ACC slate, the Tar Heels clash with the Blue Devils at WakeMed Stadium in Cary, N.C. to crack open the season. North Carolina’s defensive rebuild begins on the field in this one, as Lindsey Harris and Hanna Gardner both graduated, while last year’s starter Maggie Bill is set to miss the 2016 season with an injury. They will face a potentially potent Duke offense, led by senior Imani Dorsey and freshman sensation Ella Stevens. Make no mistake, if this is a high-scoring affair, UNC has the weapons to keep pace, with Jessie Scarpa back in the fold, Joanna Boyles healthy, and Taylor Otto and Emily Fox among the new faces.

The third enticing clash of Friday’s opening round of games features a College Cup favorite – and the No. 1 team in the TDS Top 25 – hosting a BYU side that is coming off a fantastic season of its own. The Cougars need to reload in attack after losing key pieces, and going up against the returning Penn State standouts is a good challenge. The pace of Nadia Gomes has the potential to give the Nittany Lions trouble, though the Big Ten side has the advantage both in talent and as the host. The returning U20 World Cup quintet (Emily Ogle, Rose Chandler, Ellie Jean, Kaleigh Riehl and Maddie Elliston) make Penn State a premier side this season, and will seek to start strong.

The two Northern California sides provide an intriguing look between two potential breakout programs in the 2017 season. The Broncos have loaded up in impressive fashion, with incoming transfers Maria Sanchez and Kelcie Hedge capable of making an immediate impact. With freshman additions including Kelsey Turnbow and Julie Doyle Santa Clara’s offense should be in a good place. California has the defense to cope with that talent, as goalkeeper Emily Boyd leads a stout defense that includes senior Indigo Gibson. One game won’t define either team, though the high level clash should paint a clearer picture of the impact the new additions can make on both teams.

The Big West program welcomes UCLA to its home turf, as Long Beach State looks for an early season statement win to bolster its NCAA hopes. The battle of Chloe Froment at the back against UCLA front runners like Jessie Fleming, Ashley Sanchez and Hallie Mace. Long Beach State’s star striker Ashley Gonzales shoulders the hopes of the upset, as Beach will need her to be sharp and in form in front of goal to secure the win.