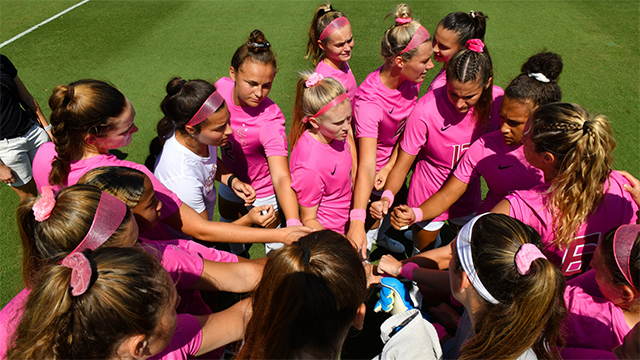 The critical matches continue in the women’s college season, with fall weather transforming campuses around the country.

Don’t miss these five matches available to watch from Friday through Sunday.

While Wisconsin are clear pacesetters in the Big Ten, both of these teams can look to keep up with a win here in Iowa. A senior-heavy group that includes defender Hannah Drkulec and midfielder Natalie Winters have fired the Hawkeyes to their 12-win mark. Defense remains a hallmark of Rutgers, despite conceding two goals in three of their past four games. Keeping it close here would be important, as Amirah Ali, Nneka Moneme and Brittany LaPlant have all popped up to score big goals of late for the Scarlet Knights. Even if this one isn’t pretty, it should be a tough, competitive match.

A two-game stretch in the Ivy League begins for both the Bears and Tigers when Princeton heads up to Providence looking to equal Brown’s record at the top of the standings. Brown’s defense has been crucial this season, picking up a 0-0 draw in College Station earlier in the year, with Sydney Cummings doing very well leading the back line. They’ve conceded just three goals in 10 games heading into this critical matchup. Freshman Grace Sherman has emerged as an offensive threat alongside Courtney O’Brien, and both will need to be sharp in front of goal to secure a win here.

This weekend’s ACC slate features a Top 5 clash between UVA and FSU down in Tallahassee. On paper, it could be a classic matchup, whether it’s a hard-fought 0-0 or a high-scoring affair. One of the big individual battles that could determine the game is how Diana Ordonez fares against the experience of Malia Berkeley. Ordonez is dangerous with time and space in the box, but needs to continue improving on playing with her back to goal. The Cavaliers have showed impressive defensive mettle lately, and will be tough for the likes of Deyna Castellanos and Yujie Zhao to crack. The possession soccer both of these programs look to play means this is the can’t-miss match of the weekend. It’s also extremely crucial for the Seminoles as they look to keep up with UNC for the ACC regular season title.

The back end of Colorado’s trip to Southern California, a win against USC would put Colorado’s at-large hopes in a safe place. At No. 29 in the RPI after last weekend’s results, the Buffaloes should be safe even with a loss. Taylor Kornieck continues to reinforce her status as one of the nation’s best, not to mention a future pro. Standing out in this would, against a side that is quality even in the face of injuries to players like Savannah DeMelo and Kaylie Collins. A big reason for that is that the team’s attack has hummed through Tara McKeon and Penelope Hocking – those two need to be shackled by the Colorado defense in order for the Buffaloes to spring the upset.

The SEC chase is quickly turning into a two-program race, and if Vanderbilt can’t find a way to beat the Gamecocks in South Carolina, little is changing that. By now, South Carolina’s formula is easy to spot: be imperious at the back. English youth national team defenders Anna Patten and Grace Fisk lay the foundation for that in front of senior shot-stopper Mikayla Krzeczowski. Vanderbilt’s offense hasn’t quite been clicking as it did last year, given all four of the team’s SEC matches so far have been 1-0 results (two wins, two losses). Haley Hopkins has remained in fine form, with nine goals and three assists, while the team has conceded just five teams in 12 games. This should be a close, hard-fought battle between two teams looking to keep their NCAA tournament hopes on safe ground – at the very least.