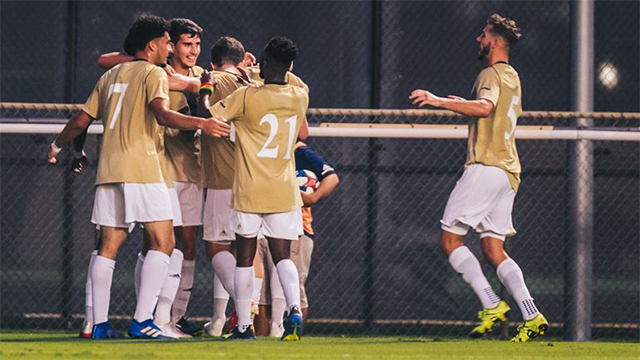 Big games are once again on the schedule around the country.

As covered earlier this week, the Conference USA race looks like it could be wide open. Whichever side gains the upper hand in this one, it will go a long way in potentially deciding the regular season title. For Charlotte, the focus is on Teddy Chaouche, who leads the team with six goals and seven assists. That’s far and away the most of the team, while goalkeeper Elliot Panicco backstops a strong defense. Marshall’s spun off four straight wins heading into this one, and have put up similarly balanced numbers, with 26 goals and eight assists in 10 games. Jamil Roberts, Pedro Dolabella and Milo Yosef have been big parts of the team’s attack, and need to come up big in this tough test.

The Red Storm are rolling this season, with just one loss (on the road to Maryland) earlier this year. A stout defense and strong spine, anchored by Brandon Knapp and Matt Chandler lays the foundation for an attack bolstered by Tani Oluwaseyi and Niko Petridis to score goals off the bench. Villanova could use the win for their RPI and at-large bid chances, and have a defense that can match St. John’s – they’ve conceded just three goals in 11 games. Scoring goals haven’t been easy, with just 11 on the season, and freshman Lyam MacKinnon has been involved in six of them. The Big East race would be thrown wide open if Villanova can come up with the win.

With West Coast Conference play beginning, Santa Clara has a huge chance to continue its bounce back season. Their six wins this season, they’ve won the most games since 2015 (11), the last time they made the NCAA Tournament. Interestingly enough, it’s been an all hands on deck approach to the attack, with 12 players combining for the team’s 18 goals. That bodes well against a St. Mary’s team that is tough to beat. Seniors Anders Engebretsen and Joe Restani have combined for 16 goals, and if the Gaels can get their foot forward, a win on the road would be within site.

The Big Ten title won’t be decided in this one, but if Indiana comes away with a win, it’s a step closer to the regular season crown. Michigan isn’t going to go into this one and lay down, and have the pieces to give the Hoosiers plenty of problems. They haven’t conceded a goal in four straight games, as senior Andrew Verdi is thriving as the starter between the posts. Nebojsa Popovic leads the line with Jack Hallahan, and can inject quality for Indiana’s back line to worry about. IU is coming off a mid-week draw against Kentucky, which was a very close game. Joris Ahlinvi’s now in the mix, and is the X-Factor going forward. With this match shown on ESPNU, it’s a chance for both programs to put on a show in search of a win.

Another team coming off a mid-week game, Kentucky’s defense is also in fine form, with five straight shutouts heading into Sunday’s game at home. The offense hasn’t been quite as prolific without J.J. Williams, with Khalil Elmedkhar scoring four goals and adding three assists to lead the team. Goalkeeper Enrique Facusse has reinforced his quality this season, with Aime Mabika anchoring the back line in front of them. Florida International’s firepower is notable; 13 players have scored at least a goal, with Alessandro Campoy and Caleb Franke leading the way with five apiece. There should be goals in this one, which could end up favoring FIU.