Top 5 Matches: Getting started in the WCC 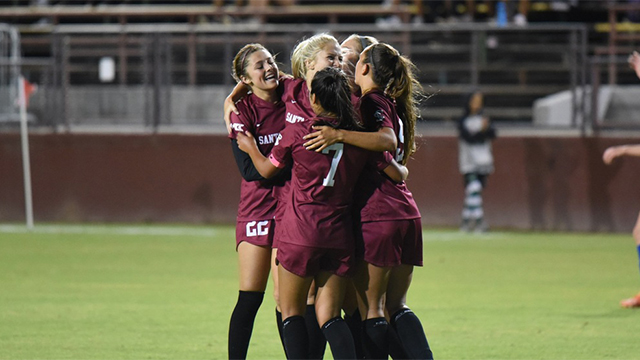 The West Coast Conference gets in on the action this weekend, highlighting some of the best women’s DI soccer games on the docket.

A marquee matchup kicks off the West Coast Conference slate season for both these programs, as the Cougars travel to Northern California and put their unbeaten mark on the line. Mikayla Colohan and Elise Flake have helped keep the offense ticking over for BYU, while on the other side the defense has given up just three goals during their first 10 games of the season. Santa Clara’s run through a difficult schedule, but their RPI should be strong enough provided they finish above .500 to get an at-large bid. Of course, they’ll have their sights set on a perfect start to the WCC slate, and with big performances from Kelcie Hedge, Julie Doyle, Isabella D’Aquila and Kelsey Turnbow, a win could be within reach. Regardless, this is a match that has the potential to put up goals and plenty of entertainment.

Aside from a blip on the road against Arkansas, it’s been relatively smooth sailing so far for Carolina. Deploying its mix of standout starting talent and a willingness to sub almost everyone on the pitch, the Tar Heels are getting enough to 10 wins from their first 11 games. Since the loss to the Razorbacks, the Tar Heels haven’t conceded a goal in three straight ACC matches. The Tigers will put that to the test, as the dynamic wide player of Maliah Morris will give the UNC back line something to think about. Morris has been clutch with three straight game winners. With a win here, Clemson could have their eyes on a potential ACC regular season title challenge.

The 2019 season is shaping up to be quite the race in the Ivy League. Yale laid down a marker last weekend with a win against Princeton, and by holding serve at home on Saturday night, it would inject even more intrigue into the race. Both teams are led by impressive freshmen in the goal-scoring department; Angela Caloia is tied for first on the team with goals (4) to go with nine assists already. Gabby DelPico’s kept pace with first-year teammate Caloia, with four goals for herself. The hosts have seen first-year midfielder Ellery Winkler chip in five goals and five assists at this point in the season, adding another weapon along with Aerial Chavarin. The Ivy League conference race won’t come down to whoever wins this game, but it’s another chance to consolidate three points.

Once again, California finds itself in a must-see encounter. This time, the Bears welcome Washington State to the Bay Area for their second game of a road trip. Cal’s win against UCLA is a nice foundation piece to a 2019 season that’s going very well. Emma Westin has taken a step forward in front of goal, while junior Luca Deza is breaking out through the first 10 games of the season. Add in goalkeeper Angelina Anderson, who has lived up to her billing as one of 2019’s best recruits, and there are several reasons why things are looking up at Cal. The visiting Cougars can lock things down in front of goal, a lot of that through experienced shot-stopper Ella Dederick. They can also cause trouble with Averie Collins and Morgan Weaver both tied atop the team lead in goals scored.

An SEC showdown features two teams that have an entire week to prepare for a clash in Florida. After battling through some early loses, the Gators are on course to compete for an SEC crown. They face the Aggies one week after beating Vanderbilt, and another win here would make it four wins from four conference games. That’s easier said than done, of course, against a Texas A&M side that boasts senior Ally Watt, and her game-changing abilities, and Jimena Lopez, who leads the nation in assists with 11. In all, the Aggies have scored 32 goals and conceded just five, an impressive return so far. If Florida gets involved in a high-scoring clash, it could be tricky. But Vanessa Kara’s been effective since transferring this season, and Deanne Rose and Cassidy Lindley have both contributed when on the field.