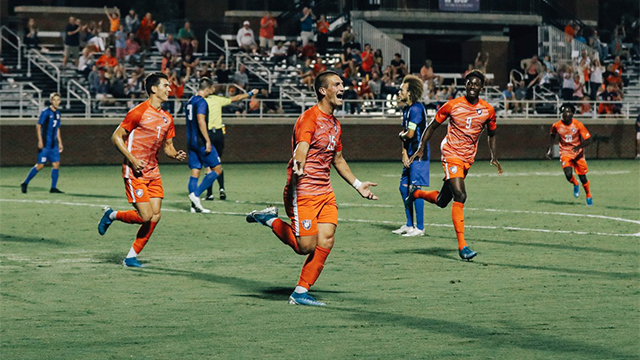 Looking to catch a men’s Division I soccer game this weekend?

Check out one of these five games to watch (all kickoff times listed EST).

The ACC rivalry features two programs going in opposite directions. Duke heads on the road looking to stop a three-game losing streak against in-state foes North Carolina. Outside of Will Pulisic and Daniele Proch, there are few bright spots for the Blue Devils. Two of those three losses came against ACC foes, so it’s not the end of the world, but it makes this game all the more important as Duke looks to bolster its resume for a hopeful postseason bid. On the other side, the hosts have been trending up after a winless opening weekend. Winners in four of their last five, North Carolina’s starting to look like the championship contender expected at the start of the season. Mauricio Pineda is as imperious as ever in central midfield, and gives UNC the platform to win just about any game. Having enough firepower going forward is the one question, and if Duke can keep things tight at the back, it’ll give them a chance for a smash-and-grab opportunity. The only danger here is both teams going to conservative and opting to defend deep, turning the match into a bit of a snoozer.

While these two teams not be ranked, both are going to have Big Ten title aspirations when they square off in State College. The Wolverines drew last time out, in a weather-shortened match against Rutgers. It’s a blow for them not to finish the match at home in Ann Arbor, but they’ve shown plenty of signs. Nebojsa Popovic has hit the ground running, providing a quality focal point for an attack that features Umar Farouk Osman and Jack Hallahan. Getting a result against Penn State won’t be easy, as the Nittany Lions continue to take strides forward. Christian Sload’s been scoring and setting up goals as a senior, setting this one up to be a back-and-forth affair.

Arguably the best matchup of the weekend pits two Top 10 ACC teams against each other. One currently leads the nation in goals scored, as Clemson has torn up opposing defenses, scoring 33 goals in eight wins. While their non-conference schedule wasn’t the most demanding, the Tigers have stepped into ACC play with wins against Duke and Notre Dame. The goals have come from Robbie Robinson and Kimarni Smith. On the flip side, after being a high-flying attack, the Demon Deacons have gone a bit more defensive, winning their past two games 1-0. They’ve conceded just three goals all season, while Justin McMaster and Calvin Harris are tied for their top scorer with three tallies each. With Wake set to host, perhaps that gives them an advantage, but this is a fascinating matchup nevertheless.

It’s been a few years since the Gauchos were a factor on the national stage, having last qualified for an NCAA tournament in 2015. A win against Stanford on home turf this Saturday would be a huge win for their at-large chances, should the program fail to win the Big West tournament. Local standout Ben Roach will need to be a huge factor in goal for the Gauchos, as the Cardinal is looking more and more dangerous going forward through freshmen Gabe Segal and Ousseni Bouda. That pair provides a nice foil for the experience of Derek Waldeck and Tanner Beason. A big game from Rodney Michael would be a nice boost for UCSB, as the talented junior is off to a slow start from a statistical perspective, but remains a key player.

A battle of quality Pacific Northwest programs sees the WCC side head north to test the Huskies on Sunday. Washington is off to a flying start in Pac-12 play, picking up a pair of wins last weekend at home. The arrival of the Pilots will certainly test the Huskies’ sparkling defensive record, as freshman Jacobo Reyes is one of several players that are off to good starts in the final third. Rey Ortiz pulls the strings in midfield for Portland, while Alejandro Pereira and Gio Magana-Rivera are providing the finishing touch in front of goal.