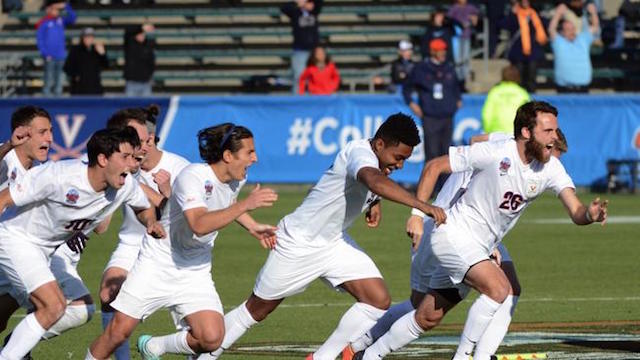 The men’s Division I season kicks off this week. The 2015 campaign is full of promise after some of the most popular players in college soccer from last season decided to stay on for another year. Combine that with a strong incoming class of talent from the U.S. and abroad, the formula is there for a great year.

With that highly anticipating beginning coming soon, TopDrawerSoccer unveils its Division I Men’s Soccer Top 25. Defending national champions Virginia checks in at No. 1. The Cavaliers lost a couple of key pieces from last year’s squad, but they do return a number of players that helped lead the team to the title. Virginia also added a strong recruiting class to the mix.

UCLA checks in at No. 2. The Bruins lost midfield general Leo Stolz and goalkeeper Earl Edwards, but the Pac-12 powerhouse returns most of the squad that made it to the national championship game last December. A healthy combination of Seyi Adekoya and Abu Danladi could wreck havoc on college defenses across the land.

The mighty Hoyas of Georgetown come in at No. 3. Joshua Yaro and Brandon Allen headline the Big East squad, which has eyes on a trip to Saint Louis this winter. The Hoyas have been on an upward track since Brian Wiese took over in 2006. Could this be the year that they break through and win the national championship?

Stanford checks in at No. 4. The most publicized collegiate program in the land during the past eight months has plenty to be excited for with this upcoming season. The Cardinal returns a number of quality players and look to be a team that will contend for the national championship in December. A strong defense led by Tomas Hilliard-Arce and Brandon Vincent will make Stanford one of the teams to watch this season.

Rounding out the top five is Creighton. The Jays were vote as co-favorites in the Big East with Georgetown during the coaches’ preseason poll. Creighton returns the talented German duo of Fabian Herbers and Timo Pitter to star in a strong, experienced group. The Jays also benefit from the return of Ricardo Lopez-Espin to the field. The sophomore had a great start to his freshman season before an injury took him out. With him back on the field, Creighton could be on its way back to College Cup.

Check out the full Men’s Division I Top 25.