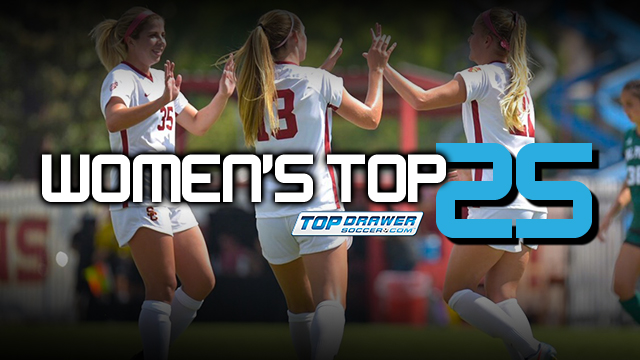 While the top three remained intact and unbeaten, a clearer picture of the top teams began to emerge in the women's DI season.

No. 2 UCLA edged at-the-time No. 6 Penn State by a 2-1 score on Saturday, on a seemingly-controversial second half goal from Delanie Sheehan. Penn State goalkeeper Amanda Dennis was adjudged to have carried Sheehan's cross over the line in the second half of the game, and it ended up being the winning goal.

Vaulting into the No. 7 spot, USC arguably enjoyed the most impressive weekend. The Women of Troy trounced their two opponents, beating Cal Poly by a 6-1 score, and following that up with a 5-0 defeat of Pepperdine on Sunday.

Butler moved into the rankings to No. 19 after an impressive 4-1 win against Notre Dame on Sunday. The Big East side moved to a perfect 3-0 record on the season.

Check out the latest women's Division I Top 25.