“We just knew our attacking was going to be better.”

Tulsa (6-3-0) head coach Tom McIntosh did not need to see the talent he had coming into the Hurricane program this season before he made that assessment. He just knew these guys could play.

After only scoring 22 goals in 2011, the Tulsa program ranked 122nd in the nation for total goals and last in Conference USA in total goals and scoring offense (goals per game). Coincidentally, the lack of output saw Tulsa finish the season with a putrid 5-12 record. 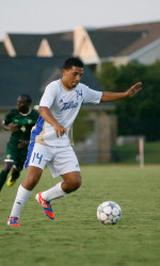 McIntosh brought in eight new players for the 2012 class to right the ship and return the Golden Hurricane program to national prominence.

Through the first nine games of the season, Tulsa has surpassed the amount of goals scored and, more importantly, the amount of wins from last season.

“I am a believer that good players can play regardless of what age they are,” McIntosh told TopDrawerSoccer.com. “We believed in those guys right away.”

Freshman striker Cristian Mata leads the team in scoring with eight goals and one assist in his eight games played. As a local kid, McIntosh said he had known about Mata for a long time and was confident he could contribute at the collegiate level.

“We felt like he could make the jump pretty quickly,” McIntosh said. “He is physically very strong and has great awareness. On one hand, you are somewhat surprised [by the success], but you aren’t because of the tools he has.”

Fellow freshman Bryce Follensbee is third on the team in scoring with five goals and two assists in his nine appearances, four starts.

McIntosh said Follensbee enrolled in spring and it really helped get the striker up to speed with the style of play in Oklahoma. The coach also credited the 6’3 striker for his ability to get the right spots around the goal.

Neither Follensbee nor Mata came from USSF’s Development Academy, the elite nationwide invitation only boys club soccer league, which is a bit of a rarity in college soccer these days.

McIntosh believes that it is a financial and logistical issue for why more players outside of the Academy are not identified.

“When you look at your budget, you have to spend the money on the Academy events . . . so the considerations go to those showcases, and you can’t be everywhere.”

Tulsa did land an Academy standout as well. Defender Bradley Bourgeois, a Houston Dynamo Academy product, has started every game at center back in his debut collegiate season.

“Bourgeouis already played nine to ten games with the Dynamo reserves before he got here, so he has a lot of experience playing at a high level.”

The freshmen are not the only newcomers who have made a difference for the Hurricanes this season.

Akron transfer Akeil Barrett is second on the team in scoring with five goals and two assists in his nine appearances. Saint Louis transfer Mark Pais has started every game in net this season.

“Mark [Pais] is a very mature kid, he is composed and has a tremendous work ethic . . . he really established himself right away with this group.”

The Saint Louis transfer also joined the program in the spring, but it is still a surprise that Tulsa has managed to click so quickly with all of these new players.

“We are looking to improve every day. That has kind of been the mindset with this group since day one. We are taking it one practice/training session at a time.”

The immediate focus has helped this group avoid being overcome with the stress of facing one of the tougher schedules in the nation to start the year. The Hurricanes have already faced top 25 programs: UCLA, South Florida, and New Mexico.

On Tuesday, Tulsa made another loud statement with a convincing 2-0 win over #11 Creighton. Mata notched both tallies in a display of his physical prowess and composure in front of the net. Tulsa fans are hoping this squad can keep it rolling with conference play around the corner, which starts with a home game against the undefeated Herd of Marshall and then #30 SMU on the road.