With a third camp of 2012 in the books, the U.S. U20 Men’s National Team is starting to come together for next year’s qualifying and World Cup cycle.

The players who’ve been involved in other training camps noticed a slight difference from the previous two experiences this year.

“It was good, it was kind of a different camp, we only had one game on the last day, so most of it training with the team,” Chicago Fire midfielder Victor Pineda told TopDrawerSoccer.com. “Before we would train maybe the first two days then we would have a game, rest a day, and then have another game… it actually felt like I was preparing for something, whereas before it felt like trying to identify players and stuff like that.” 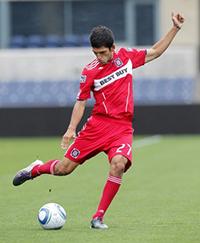 During previous camps this year, the U.S. U20s would play at least two or three games against other teams, matching up against MLS squads down in Florida back in February. This time, the only other opposition the U20s faced was a meeting with the University of Washington on April 16, the last day of camp.

It was a tough matchup for the USA, on the back end of two practices a day the entire week. After a slow start, the U20s missed a number of chances throughout the game before securing a late winner on a Pineda penalty kick.

“Playing a college team, you know they’re going to be physical, they’re going to come out fired up especially playing the national team,” midfielder Wil Trapp told Top DrawerSoccer.com. “I thought we controlled the game, we peppered their goal quite a bit but just couldn’t stick one in until the late PK.”

Like what has taken place across the entire youth national team setup, the U20s are trying to implement a 4-3-3 formation, and played out if one in the latest camp. It did require some players, such as a winger like Pineda, to adjust to the different nuances of it.

“I’ve played a 4-3-3 before but it wasn’t like that,” he said. “Before the outside wings would have to drop back a lot, it would be a lot of running for us. In the U20s it’s a different style where [Coach Ramos] wants the wingers to push up all the time, try to spread the opponent as much as possible, it’s just something to get used to for the future.”

Defender Boyd Okwuonu, who has played with the U.S. U17 and U18 teams, enjoys the formation.

“It’s more aggressive, we’re more attacking,” he said of the 4-3-3. “We have a different mentality in this formation, we’re going out there taking risks, going forward.”

With the qualifying process just under a year away, there’s still a chance for players to impress. But according to forward Danny Garcia, there was still a sense of urgency heightened the intensity of the camp, as it’s play well or go home.

“There is a difference because everyone has to put everything in it,” he said. “It’s all or nothing in the camp because either you do great and get called back, or do poor and don’t get called back.”

For Garcia, who has scored 17 goals in 19 games for FC Dallas U18s in the Development Academy, the camp was another opportunity to measure up against some of the best talents the U.S. player pool has to offer.

“It’s given me a chance to see how I’m doing, how my level is, how skillful I am compared to the other players in the Academy, in college or even in Europe,” he said.

This fall, Garcia is set to take his talents to North Carolina where he’ll join other Tar Heels in the player pool like Okwuonu, Jordan McCrary and Mikey Lopez. For that quartet, and the rest of those eligible, the next six to eight months are going to determine their chances of one day making the qualifying roster – and that’s something they have to prove outside of these camps.

“[The coaches] really press on what you do here is very important, but it’s even more important to do what you do at home – it’s almost like your homework,” Okwuonu said. “You’ve got to go home and have the same mentality that you’d have when you have at these camps. You’ve got to come out performing and everyday try to make yourself better.”