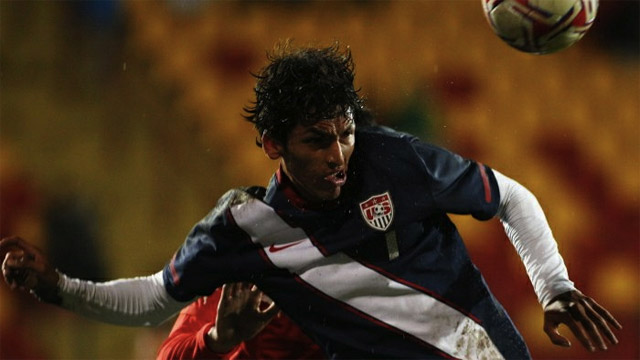 Traveling to play games in South America is no simple task, and for the U.S. U20 Men’s National Team a recent trip south of the equator ended with three losses against Uruguay and Chile.

As head coach Tab Ramos continues preparation for U20 World Cup qualifying in 2013, the group embarked on a three-week journey that began with a training camp in Houston at the end of May and concluded with a pair of friendly losses against Uruguay and then a 2-1 defeat against Chile.

“I thought it was a good trip for us as a team,” midfielder Wil Trapp told TopDrawerSoccer.com. “We didn’t win the games, but when it comes down to it, these were our first three competitive matches as a team. We were stacking up against South American competition; it’s never easy to go down to win games period let alone as your first few games together.” 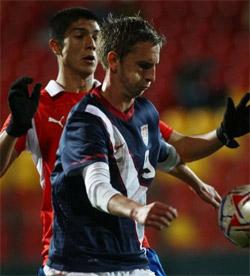 Added defender Eric Miller: “I thought it was really good to play high level competition, just kind of figure out where we were at as a group.”

Ramos called up a total of 20 players for the trip, which began in Houston on May 30. After five days of training, and a 2-0 win against Houston Dynamo’s Academy team, the team traveled south for the trio of friendlies.

Injuries reared their ugly head before the team even made it to South America, however, as Real Salt Lake midfielder Luis Gil was forced to drop out with a sprained MCL while training in Houston. Vancouver Whitecaps forward Omar Salgado was called up for Gil, but Salgado ended up breaking his foot on the trip and might miss up to three months of action.

Once down in South America, the U.S. lost its first two friendlies against Uruguay, 4-2 and 2-0.

“Our first game against Uruguay, we did some good things, and then there were a lot of things that we needed to work on,” Trapp said. “For our second game we came out and tried to perfect the things that we didn’t do as well with in the first game.”

The final game was a 2-1 loss against Chile on June 12, and despite the result, Trapp thought things continued to progress forward in the final game.

“Our last match against Chile I thought we kind of put it all together,” he said. “We didn’t win, but it was definitely our best game overall.”

The trip marked the fourth camp of 2012 for the U20 team, and according to Miller, it was made clear that those on the trip were on the inside track of landing a spot. But competition is going to be fierce for those spots for World Cup qualifying next year.

“Tab told us a couple times in South America that we were that group and he said there’s probably 10 or 15 other players he’s looking at to take to qualifying and hopefully to the World Cup,” Miller said. “So I think [the coach staff] is getting to the process of narrowing things down and figuring out who their guys are going to be come qualifying.”

Only four players on the trip – Boyd Okwuonu, Juan Pablo Ocegueda, Daniel Garcia and Miller – have been in each camp so far this year, and Ramos isn’t quite done searching the player pool.

But starting to establish the core of the 20s now is crucial, as it gave those on this trip a chance to get to know each other even better and an opportunity to improve the team dynamic and chemistry.

“A lot of the guys have played on the younger [national] teams before so they know each other, but for the guys who didn’t like myself, we’re starting to fit in,” Miller said.

Regardless of who ends up making the roster, it’s clear that the coaching staff and players alike learned a great deal in Chile and Uruguay when it comes to what the team needs to focus on and work on moving forward.

That included improving the transition from defending to attack.

“One of the main things [we need to work on] was just going forward quickly and trying not to turn back when we’re going forward,” Trapp said. “In our first game against Uruguay it was probably the main thing. If you watched the South American teams, the ball turns over and they’re trying to go forward. It’s one or two passes and they’re running down at us.”

There’s not much time for a break for the U20s, as the next competition on the horizon is the Milk Cup at the end of July. The USA is scheduled to face Denmark on July 21 and Turkey on July 23 at the international tournament in Northern Ireland.