Back in March, the U.S. U20 Men’s National Team learned that they were going to face a very big challenge in Turkey at the 2013 U20 World Cup. Paired with Spain, France, and later Ghana, the U.S. was effectively put in the Group of Death for the competition. 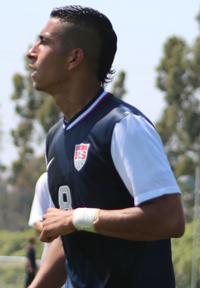 However, the coaching staff and players have hardly let the rich pedigree of the upcoming competition deter them from making a loud statement on the international stage.

“Every game, we have to face the challenge,” Benji Joya said after Sunday’s scrimmage at the Home Depot Center. “At the end of the day, [France, Spain, and Ghana] have to worry about us – not so much us having to worry about them. I think we have a pretty tough squad – mental wise, physical wise – we all put in 110% on the field. We’re ready to work hard.”

Ramos did not seem to shy away from the draw either when he talked to ussoccer.com shortly after it was announced.

“This is the reason why you go to the World Cup – to play against the best,” Ramos said. “We get Spain and France right off the bat and we’re going to start working toward our preparation for that.”

Joya is expected to be a key piece for Ramos at the event – at either winger or center midfielder. After a breakout campaign during the CONCACAF Championship, Joya has continued that run of form during the April camp.