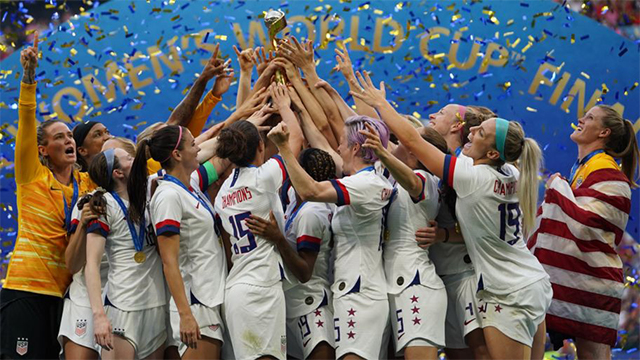 A 2-0 win against the Netherlands this past Sunday paved the way for another set of celebrations, and kicks off a half-year of victory tours and potentially a surge of interest in the National Women’s Soccer League.

One key theme from the title-winning squad is the Under-20 youth World Cup experience members brought with them to this group. Of the 23-player squad, 14 competed in a World Cup with the U.S. Under-20 squad.

Even more crucially, 10 of the 11 starters featured in an Under-20 championship of some kind, dating back to Becky Sauerbrunn and Megan Rapinoe at the 2004 edition of the competition.

Most notably, the last time the U.S. won an Under-20 World Cup in 2012, four players from that team made the jump to full team contributors, including three starters in Sunday’s title game: Crystal Dunn, Julie Ertz and Sam Mewis. Additionally, U.S. assistant and Virginia head coach Steven Swanson led that team to the title.

It’s often said that winning youth World Cups, men’s or women’s, isn’t the most important. That’s certainly notable here, as the 2008 squad that featured Alex Morgan and Alyssa Naeher was the only other time the United States captured the championship. In 2014, the team didn’t even make the semifinals, but Rose Lavelle, Lindsey Horan and Mallory Pugh emerged as players on the roster. The importance is making sure the right players being identified and given the chance no matter what. Starting center back Abby Dahlkemper and forward Christen Press weren't part of their respecrtive U20 teams.

Looking ahead to the 2023 World Cup – which is yet to have a confirmed host – the U.S. is sure to look at candidates to play their way into the full team conversation. And while not every single one of them will have matriculated through the Under-20 setup, it’s been a key piece in the development of the most recent World Cup winner.

There are candidates from the past few teams too. Andi Sullivan just missed out on the World Cup roster (and would’ve made sense to go for experience over someone like Alli Long or even Morgan Brian), after featuring at the 2014 edition. Casey Murphy has the look of an international caliber goalkeeper. Katelyn Rowland is still holding it down in goal for the Seattle Reign. Ashley Sanchez played in two U20 World Cups, and is in the upper tier of college players as she enters her junior year at UCLA. Even though the U20s struggled as last year’s competition, Jaelin Howell (Florida State), Naomi Girma (Stanford), Brianna Pinto, Emily Fox (North Carolina) and Kiki Pickett (Stanford) are worth tracking as their college careers continue.

No matter what happens, for all the talk of the rest of the world catching up, the U.S. once again found ways to win its second straight World Cup – thanks in strong part to the players who have progressed through the Under-20 setup. It will be interesting to see how this trend either continues to elevate the team, or if the struggles of the past few groups sees the rest of the world truly catch up.