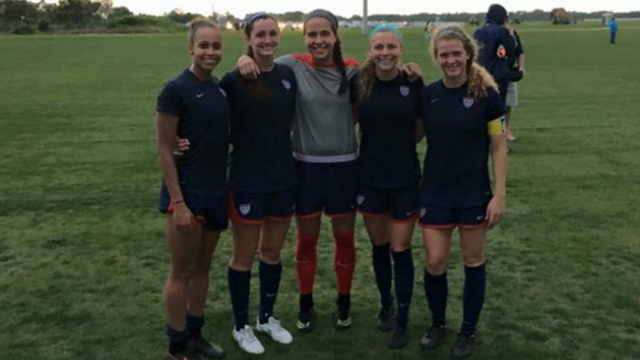 It's rare that a U.S. youth national team's trip in May carries significant stakes for a fall college season.

That's the case of this month’s U.S. U20 WNT’s trip to Papua New Guinea, as the implications are potentially massive on the 2016 women’s Division I campaign.

Twenty-one players are on the roster for the May 21-June 1 trip to the Eastern Hemisphere. Depending on who impresses and ends up getting a shot to compete in this fall’s World Cup, a number of stars could be absent for the collegiate season.

The U.S. Soccer Federation requested players to redshirt for their respective college seasons in order to compete on this year’s World Cup squad. The competition overlaps with the championship portion of the college season, as the tournament in PNG is scheduled to run from November 13 to December 3 (the day before the 2016 Women’s College Cup).

While college coaches are supportive of their players getting to represent the USA, the decision to require players to miss a college season has been understandably met with mixed reviews.

“My fear right now with the design of this venture into the U20 World Championship is we’re almost sacrificing player development for winning,” North Carolina head coach Anson Dorrance told TopDrawerSoccer. “They want to have full access to the players all fall, which I do not think is to the benefit of their development.”

Scheduling conflicts between international youth tournaments and the college season are not new. The CONCACAF qualifying cycle for this group overlapped with the tail end of the 2015 NCAA Tournament, and limited head coach Michelle French’s options for player availability in Honduras. A mixture of college and club players had little trouble securing progression to the global tournament.

It’s occurred at previous World Cups. Back in 2012, the triumphant U.S. side was composed primarily of college talent that missed the beginning of their season that year. The head coach of that side, Steve Swanson, missed part of Virginia’s campaign. During the 2008 U20 World Cup, which was held in a similar November-December timeframe, players on that roster split time between the college game and the youth World Cup.

Part of the reasoning behind the redshirt mandate this time around is the preparation schedule. French, who was unable to be reached for comment for this story, has tentatively scheduled training camps in August, September and October, according to a USSF Future Planning Document. While the exact dates have yet to become official, early indications are that they are set to last a couple of weeks at a time.

The redshirt process requires players to make a decision on which path to take for 2016, and some have already decided to remain in school. Texas A&M’s Mikaela Harvey opted to play in college. Stanford’s talented rising sophomores Jordan DiBiasi, Michelle Xiao, Tegan McGrady and Alana Cook, all elected to remain with the Cardinal.

Academics factored into the quartet’s choice, as redshirting in the fall would set up a difficult future academic path going forward.

“At Stanford, they are very focused student athletes, they want to do well academically,” Ratcliffe said. “Being required to redshirt would make it more challenging, they’d have to miss those classes and have to make up those classes before the season starts [next fall].”

On the other side of the country, defending champion Penn State is likely to cope with a significant talent drain. Five of its players are on the roster for the current trip to PNG: Rose Chandler, Maddie Elliston, Ellie Jean, Emily Ogle and Kaleigh Riehl. That’s four-fifths of the team’s projected starting back five.

Chandler’s case is an intriguing one, because she already used her redshirt for the 2014 season, meaning she’d face losing a year of eligibility if she makes the roster and has to skip the upcoming campaign. Adding a unique wrinkle to the situation, one of Penn State’s incoming recruits, German youth international Laura Freigang, is expected to play both the college season and with her national team in PNG. Canada plans on working with schools so players can compete in both, a source told TopDrawerSoccer. Regardless if U.S. Soccer amends the policy or not, there will be a talent drain by the time the 2016 NCAA Tournament rolls around.

The path of compromise is one Dorrance would have rather seen for the U.S. Another avenue he suggested would be to lean on the college players for the starting eleven, while bringing in mostly club and high school players as bench options.

“What I would have preferred to have seen is for the player development people for U.S. Soccer meet with the collegiate people to have some sort of compromise where they can still play in their collegiate season, and obviously we release them for the World Cup,” he said.

While two of Dorrance’s players are in the mix for the final World Cup roster, his concern wasn’t just about being unable to call upon the likes of Jessie Scarpa and Taylor Otto this fall.

“Many of the international matches, including many of the matches we play here in CONCACAF aren’t as competitive as your typical elite college game,” he said. “What I question is the value of basically setting up a protocol in preparation for the U20 World Cup that dominates all of the player’s time. Because the collegiate environment at the highest level of Division I is an incredibly effective player development platform.”

DiCicco recalled that his decision to keep players in school stemmed from a desire to keep them sharp prior to traveling to Chile.

“One of the reasons why I didn’t want them to redshirt was I needed them in a competitive environment, training every day,” he said. “In some cases that wouldn’t have been the same if they had redshirted. I needed them getting games. There were times where I got a couple calls from players who said I’m not playing as much as I thought I would because [my coach is] playing someone else in my position…It’s what the college coach felt they had to do.

For some of the players in contention for a spot at the World Cup, this could end up being their only chances to suit up in a U.S. jersey at an international tournament. That point is something DiCicco said he emphasized, and one that rings true eight years later. It makes the decision all the more difficult fo the players.

“You can’t just expect that you’re going to get another chance to represent the USA against the rest of the world,” he said. “We didn’t get every one of our players that we were after. But the players that came wanted to be national team players.”

Whatever ends up happening between now and the end of November, the U20 Women's World Cup is set to leave its mark on the college campaign, regardless of who ends up going and who ends up staying in school.