U20 WNT heads to France for training camp 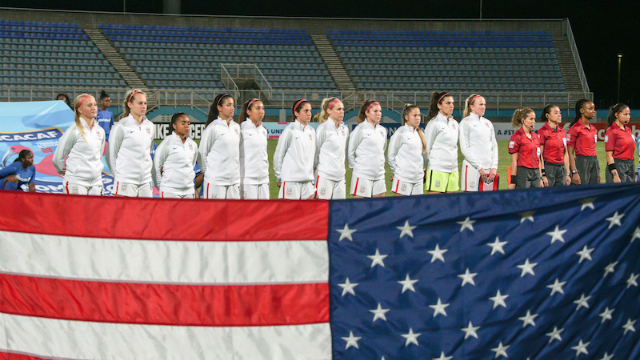 The U.S. Under-20 Women’s National Team will travel to France from February 23 to March 7 for an extended training camp and two games during a trip that will serve as a test run for this August’s 2018 FIFA Under-20 Women’s World Cup.

The trip will feature two international matches against the France U-20 WNT, long one of the strongest youth teams in Europe, with both games being played in venues for the U-20 Women’s World Cup. The tournament will be held in four stadiums throughout the country’s Brittany region.

The USA will play France on Saturday, March 3 at Stade de la Rabine in Vannes before traveling north for the second leg on Tuesday, March 6th at Stade Marville in Saint-Malo. The other two World Cup venues are Stade Guy Piriou in Concarneau and Stade du Clos Gastel in Dinan-Léhon.

U.S. U-20 WNT head coach Jitka Klimkova has called up 24 players for the trip, 17 of whom helped the USA qualify for the World Cup during the 2018 CONCACAF Women’s U-20 Championship in Trinidad & Tobago last month. The players that were not on the qualifying roster are goalkeeper Brooke Heinsohn (Duke), defender Jordan Brewster (Internationals FC), defender Samantha Hiatt (Stanford), midfielder Delanie Sheehan (UCLA) and forwards Amirah Ali (Rutgers), Jenna Bike (Boston College) and Chardonnay Curran (Oregon). Heinsohn, Brewster and Hiatt were alternates for the World Cup qualifying team.

The roster features players from three birth years, with nine players born in 1998 (the age cut-off year for the World Cup), 12 born in 1999 and three born in 2000. Brewster, defender Naomi Girma, forward Sophia Smith, and midfielders Jaelin Howell and Brianna Pinto are the only players on the roster who are not yet enrolled in college.