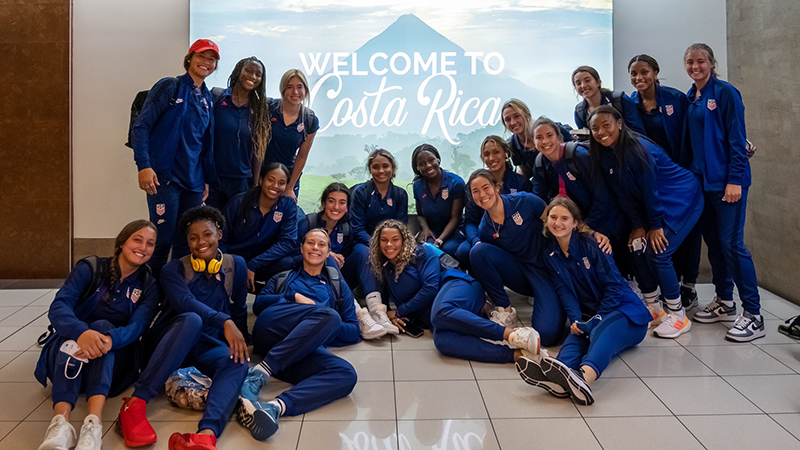 After dominating the Concacaf U20 Championship earlier this year, the U.S. Under-20 WNT is out to replicate that attacking prowess at this year’s World Cup.

The U.S. opens World Cup play against Ghana down in Costa Rica on August 11, becoming the first U.S. youth team to play a global tournament since 2019.

“It's a group that's got an awful lot of attacking ability,” U.S. U20 head coach Tracey Kevins told TopDrawerSoccer. “And I think that they come in different profiles: we have the one-v-one specialists, the person [that] is able to take on a player, we have those that are terrific in short spaces and able to combine, we've got those that are just so threatening with the ball at their feet, and how they can create chances out of very little.”

Competing at the Conacacaf Championship, the U.S. dominated, outscoring opponents by a 49-0 margin, an average of seven goals per game. It’s a level that is surely not going to be replicated against a higher level of competition at a 16-team World Cup.

But Kevins has named a roster featuring some of the top attacking U.S. prospects from club, college and even professional soccer. Duke(w) sophomore Michelle Cooper is one of several players from top Division I schools; joining her from the college ranks are Andrea Kitahata (Stanford), Simone Jackson (USC), Trinity Byars (Texas(w)) and Allyson Sentnor (North Carolina(w)). Recently-turned pro Jaedyn Shaw should add an attacking element after missing out on the Concacaf tournament, while Total Futbol Academy speedster Alyssa Thompson has shown that she belongs at the U20 level.

“When I look across the attacking talent that we have, is that we have these different profiles within our team,” she said. “We know on any given day that a certain opposition might give us one thing and might not give us another. So, we have this ability to be able to have certain players that can facilitate certain roles that we think are going to be very important through the group stage and beyond.”

On paper, the three opponents in Group D represent a steep challenge. After playing Ghana, the U.S. takes on the Netherlands and Japan – the latter routinely a powerhouse at youth tournaments in women’s football. Adding a unique layer to this tournament has been the lack of international games around the world due to the COVID-19 pandemic. While Ghana did secure a spot in Costa Rica at a tournament this year, both the Netherlands and Japan arrive thanks to 2019 achievements.

The U.S. has faced a much more truncated preparation than usual, essentially using the last eight or nine months as buildup. In previous World Cup cycles, there is usually up to two years of prep involved. Still, there’s been enough time for the group to get to know and Kevins thinks they’ll be ready to fight for one another.

Part of that buildup – and a critical one at that – was a trip to Europe back in June to compete at the 2022 Sud Ladies Cup in France. Getting to play three World Cup-level opponents in a short amount of time allowed the U.S. to get a taste of what the group stage would be like. Adding to the stress and challenge for the players was that it represented a final window of evaluation ahead of the final roster. In games against France, Mexico and Netherlands, the U.S. secured two wins and a draw, helping to clarify the roster that was announced on July 25.

Before they take the world’s stage, get to know the personalities of the #U20WYNT 🤩 pic.twitter.com/PpSMRxXGbW

“That trip was hugely important for us and it also came with some additional nerves as we were picking a roster at the same time,” Kevins said. “It simulated some of the potential kind of stress and nerves that exist within a World Cup. So, it was a very, it was a very, very good tournament for us.”

The U20s arrived in Costa Rica last week. It gave the team a chance to reunite, and a week to adjust and finalize preparation. The U.S. is seeking a first youth World Cup tournament win since 2012, when the U20s won in Japan.

Kevins is hoping the team can play deep into the tournament, and that players on the roster are eager and hungry after the 2020 U17 and U20 World Cups were canceled due to the pandemic. Those players will get the opportunity this year to shine on the global level, many for the first time.

“We always want to be able to represent the crest, to the best of our ability, and be here for as long as possible,” she said.