Of all the U.S. youth teams, the Under-23 Women’s National Team sometimes has the hardest time finding its place in the American soccer landscape.

While all other teams have a tournament to prepare for – or in the case of the U23 men, the Olympics – the U23 women don’t have an international event on the horizon. 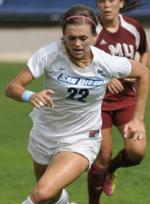 But recent tweaks and changes triggered by the U.S. Soccer leadership has given trips like the one to La Manga, Spain at the end of February plenty of meaning.

“One of the good things that April [Heinrichs] has done and Jill Ellis since they’ve taken over as the technical directors, they’ve worked hard to vertically integrate all the teams, from the youth teams all the way up to the full team,” head coach Randy Waldrum told TopDrawerSoccer.com. “Obviously in a country of our size you need that vertical integration with all the teams, and I think it’s kind of rejuvenated all the kids to know that if they do well with this age group, they realistically have a chance at getting a look with the full team.”

With the incentive of possibly getting a look in the full U.S. national team on the line, the U23s enjoyed a successful trip from February 22 through March 5, winning the Four Nations Tournament. A mixture of college players and recent graduates put together three solid performances, defeating U23 teams from Norway, Sweden and England to capture the title.

Waldrum, in his second season as the head coach of the U23s, was pleased with the team’s improvement from last year to this year. Along with the continued integration of all youth teams, another huge difference between this year and last is the creation of the National Women’s Soccer League, a destination for seven players on the team later this season.

However, the season has yet to start, and with the rest of the team mostly college players, the group faced the challenge of not having a lot of training or time together before things kicked off.

“We threw those kids together four days before the games started,” Waldrum said. “You always worry about that because you are playing teams that are used to training regularly together and playing together and our kids, because of the college season, and not really having the pro league kicked off yet, we don’t really have that.”

Obviously it wasn’t a detriment to the performance, as the U.S. outscored opponents 11-2 during the three games. Stephanie Ochs, a 2011 graduate of San Diego, was one of the top players in a U.S. jersey, scoring two goals and adding three assists on the way to picking up MVP honors. A large core of the team were also holdovers from last year’s U20 World Cup winning team, with Julie Johnston (Santa Clara), Morgan Brian (Virginia), Sarah Killion (UCLA) and Vanessa DiBernardo (Illinois) seeing plenty of time on the field.

It continued to make an impression on Waldrum that this level is exactly what many of these players need in order to continue their development.

“The competition’s great for them, and to get some international games, because those players need it,” he said. “A Stephanie Ochs, for example, was the player of the tournament, and she needs these games, she needs to continue to develop before she’s ready for the full team.

“We’ve got quite a few players on the roster who are like that, maybe this year they aren’t ready, but if we keep getting them competition and camps then they will be prepared when the time comes with the full team. I think they are highly motivated for that.”

Another unique trait to the team is when it gets together. If it follows the pattern of last year, the U23s will perhaps take another trip this summer, before another camp later in the summer.

Whatever the case, the team remains an important stepping stone linking players from being a collegiate star to earning a look from the full national team, something that is sure to inspire this group like it did in La Manga.