U23 WNT head to Spain for three matches 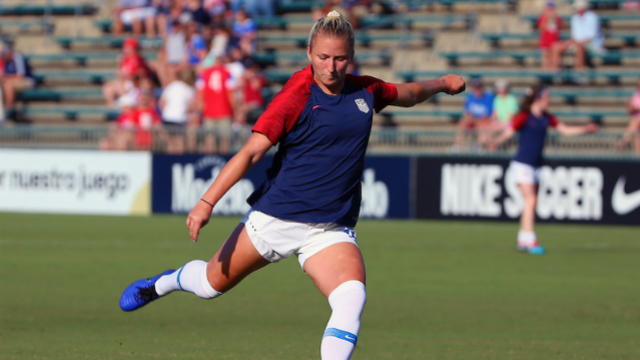 The U.S. Under-23 Women’s National Team will head to La Manga, Spain for three matches at the 2019 Women’s International U-23 La Manga Tournament.

The USA will face the U-23 squads from Sweden on April 5, France on April 7 and Italy on April 9. England and Norway will also participate in the six-country friendly competition, where every team will play three matches.

The U.S. team will be coached by Mark Carr and will bring a mixed squad of U-23 and U-20 age players. The 20-player roster features 14 collegiate players, four players currently playing professionally in Europe and two youth club players in forwards Payton Linnehan and Jordan Canniff, both of whom were members of the USA’s 2018 U-17 Women’s World Cup Team.

The U.S. U-23 WNT just finished its participation in the Thorns Spring Invitational in Portland, Ore., but the team traveling to Spain is an entirely different roster.

Players born on or after January 1, 1996 (the age cut-off for this year’s U.S. U-23 WNT) are age-eligible for this competition. The U.S. roster features two players born in 1996, four born in 1997, six born in 1998 and three born in 1999. The remaining five players – Canniff, Linnehan as well as forward Summer Yates, goalkeeper Meagan McClelland and defender Ella Shamburger  -- all born in 2000 and 2001 – are members of the USA’s current U-20 Women’s National Team player pool.

Two players on the roster have spent time with the senior U.S. WNT in Murphy and forward Hailie Mace. Mace was a member of the USA’s 2018 Concacaf Women’s Championship squad as a defender and has earned three senior team caps.