CARY, N.C. — It was the matchup everyone wanted to see. The whirling Virginia attack up against a stout and impregnable UCLA defense in the national semifinals.

And it didn’t disappoint.

The two talented teams battled to a tightly contested 1-1 draw over 110 minutes, leaving it all down to penalty kicks. UCLA goalkeeper Katelyn Rowland made two saves in the shootout, and Rosie White converted the decisive spot kick to clinch a spot in the title game. 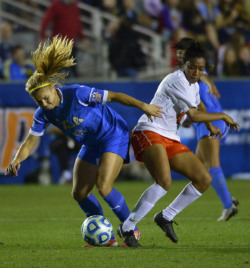 The nervy finish came after Virginia’s Makenzy Doniak and UCLA’s Ally Courtnall exchanged second half tallies, with Courtnall providing an 85th minute equalizer for the Bruins to ensure overtime.

“It was one of those games where it was back-and-forth, we had a little bit of a chess match at times, and I give a lot of credit to the UCLA girls for really rising to the occasion,” UCLA head coach Amanda Cromwell said after the game.

While the goals didn’t flow in the same fashion as they did in the first semifinal on Friday, it was enthralling soccer nonetheless. Virginia’s vaunted passing game poked and prodded at the behemoth back line of UCLA, while the Bruins aimed to find one of their dynamic forwards up front.

Dangerous opportunities in the first half were scarce, if not non-existent. Virginia’s Morgan Brian flashed a few dangerous volleys well high or wide, while the Bruins couldn’t come close on set piece chances. Neither side managed a shot on frame at the halftime break.

It came as no surprise for Virginia head coach Steve Swanson as to how challenging it was to break down UCLA’s defense.

“You’re talking about some of the best players in the country playing against each other, you’d expect it to be difficult,” he said. “I thought there were ebbs and flows like there should be in games like that.”

The second half featured more of the same – tight soccer with limited chances. UCLA forward Kodi Lavrusky flashed a diving header well wide, and Brian lofted the first shot on goal of the game into the welcoming arms of goalkeeper Katelyn Rowland.

UCLA found itself pinned inside its own half but kept the danger to shots from distance, as Makenzy Doniak had a drive that sailed just high of Rowland’s frame. It was the same story for the Bruins, as their first shot on goal came in the 67th minute thanks to Lauren Kaskie’s effort from outside the box - an easy save for Amber Stearns.

MORE COLLEGE CUP COVERAGE: UVA take pride in 2013 despite PK loss | Noles on on against Hokies

The UVA first-year was called into action for a much more difficult save minutes later, punching away a swerving Sarah Killion free kick in the 70th minute.

An error from Abby Dahlkemper allowed Virginia to finally break the deadlock in the 73rd minute. The All-American center back’s pass towards Rowland was too weak, allowing Doniak to pounce on the ball, round the netminder and put the Cavaliers out in front. It seemed a cruel fate for a Bruin side that matched and took the game to Virginia for long stretches, outshooting the Hoos 14-8 on the night. But they would get their chance soon after.

Pressing forward to seek an equalizer, the Bruins nearly had it in the 78th minute when a spinning Rosie White created space for herself at the top of the box, beating a defender. However, her shot went well high of the target.

The tying goal did come in the 85th minute. A threaded pass from Sarah Killion found Courtnall in space in the penalty area. She danced on the ball, kept her composure and finished past Stearns to tie the game.

“When I got the ball I was like ‘oh my god I can’t mess up, I have to put it away,’” Courtnall said.

In overtime, with fatigue settling in, each team creating chances – Morgan Brian fizzing a free kick over Rowland’s goal and UCLA forward Taylor Smith smashed a shot onto the post. Courtnall came close to a second goal, hitting a high, looping ball that also hit the woodwork.

The table was set for Rowland’s penalty kick heroics after neither team could break the deadlock in the extra period. The Bruins entered the decisive spot kicks with plenty of confidence, and will get a chance at a national title on Sunday.

“We’ve been training with them once College Cup started and you go through the motions in playoffs, it’s just part of the training,” Cromwell said about the penalty kick shootout. “And watching Katelyn against our own team, she can read them well, she can fly. I knew she was going to get at least one, getting two is phenomenal especially against a team like Virginia.”