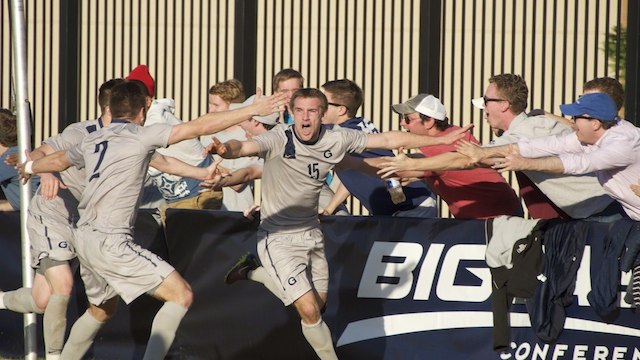 The third round of the men's NCAA tournament caused a flurry of motion in the top 15, nothing more notable than Notre Dame's fall from No. 2.

The Irish dropped a 1-0 heartbreaker to No. 16 seed Virginia, which forced the defending champs out of the tourney and pushed the lowest overall seed up to No. 5 in the biggest move of this week's rankings. In the quarterfinals, Virginia will face Georgetown, which knocked off Syracuse 2-1 on the back of a Jared Rist winner in the 95th minute.

No. 1 UCLA avoided the same fate by dropping a California team that had beaten the Bruins twice in the regular season. A 55th minute tally from Jordan Vale proved to be the ultimate match-winner after Stefano Bonomo pulled it to 3-2 in the 75th minute. UCLA faces new No. 2 North Carolina, which topped Clemson 2-1 on a 72nd minute Rob Lovejoy goal, with a spot in the College Cup on the line. Quite an Elite 8 matchup, to say the least.

Elsewhere, Michigan State and Providence booked a date in the quarterfinals with impressive victories won through vastly different means. The Spartans managed to come back from a 2-0 deficit with 15 minutes left, including a goal with two minutes to go in regulation to force extra time and eventually penalties, which Michigan State won. Providence, meanwhile, pitched a shutout against attack-heavy UC Irvine, and a 78th-minute tally from Markus Naglestad continued the Friars' best postseason run.

The last quarterfinal meeting involves Creighton and UMBC. Creighton hung on thanks to goals from Fabian Herbers and Fernand Castellanos, while UMBC upended its second ranked foe in as many matches 1-0 thanks to a first half tally from Mamadou Kansaye.