Everything went according to plan for the UCLA Bruins in their biggest game of the year, and then, like watching a hurdler trip on the final hurdle, the prize was ripped away in the final minutes of another crushing defeat at the hands of their most successful rival.

Facing off against the #1 team in the nation Stanford for the first time this season, UCLA designed an artfully crafted game plan, which heightened the strengths of Bruins athletic midfield and created havoc for the Cardinal defense. 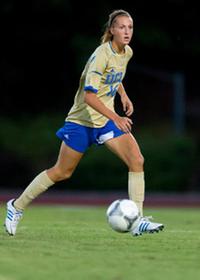 The Bruins deservedly grabbed the lead early in the second half when freshman Taylor Smith put away a rebound following a sequence that started with Samantha Mewis winning a challenge in the midfield to open up the Stanford defense.

It was exactly what the Bruins had envisioned. Sarah Killion, Rosie White, Jenna Richmond, and Mewis using non-stop pressure to win the ball back against the highly-regarded Stanford squad.

Rightfully, UCLA stuck with its game plan after the goal, and did not sit back with numbers. The Bruins continued to pressure and force Stanford into direct passes forward.

Yet, even with the best plans, there is no way to account for everything.

The Bruins lost track of Stanford’s dynamic attacker Chi Ubogagu for just a moment and suddenly the score was 1-1 off a strike from 25 yards out in the 77th minute.

Ubogagu lost her mark again only 72 seconds later and set up Rachael Quon for the second goal.

All of a sudden, 75 minutes of hard work was lost and the Bruins were forced to chase the score for the final ten minutes of the game.

“I think there were a couple of breakdowns. I am going to have to look at the film to see exactly what happened on both of the goals,” UCLA head coach B.J. Snow told TopDrawerSoccer.com after the game. “I think a couple of things that we did before those plays happened are things we need to fix so we don’t let them have opportunities at the other end of the field.”

Snow went on to talk about how his squad can use this game as a learning experience for the future. While Stanford grabbed the Pac-12 Conference title and the automatic bid to the NCAA Tournament with the win, UCLA will enter the field of 64 as the highest non-automatic qualifier. Barring a surprising defeat during the last week of the season, Stanford will be the #1 seed in the tournament and UCLA will likely be the #2 overall seed.

The next time these programs could meet this year would be College Cup in late November in San Diego.

“That was a College Cup-type atmosphere and College Cup-type game,” Stanford head coach Paul Ratcliffe said in reference to the 4,068 fans in attendance and the television audience. “Hopefully, it will prepare us and UCLA for later on.”

Snow is confident that his players learned from this experience and will improve heading into the next phase of the season.

“Absolutely. And that is what this is all about,” Snow replied when asked about taking something away from the game to change the outcome in a rematch. “Full credit to Stanford, they are an excellent program with a great coach. We owe it to them to go back and look at what we need to do to get better heading into the NCAA Tournament.”

For Snow, in his second season in charge, this is only his second meeting with Stanford as the head coach, yet for his seniors, they have never been able to beat their counterparts from Palo Alto.

“I think it is the character of the team,” Ratcliffe said about his group’s streak against the Bruins. “We have a great senior class and they showed it tonight against a very good UCLA team. I was very impressed with that UCLA squad.”

To UCLA’s credit, Stanford has won four Pac-12 titles in a row now and holds a 41-game winning streak in conference play, so it is not a UCLA only problem.

“They give everyone in the country trouble . . . it is not just us,” Snow replied. “That is why they are champs. They are not going to lose; you have to knock them off and take the crown. And they are difficult to knock off.”

UCLA will likely need to knock off Stanford and take the crown to achieve its goal of winning a National Championship. It may require perfection to clear that final hurdle.