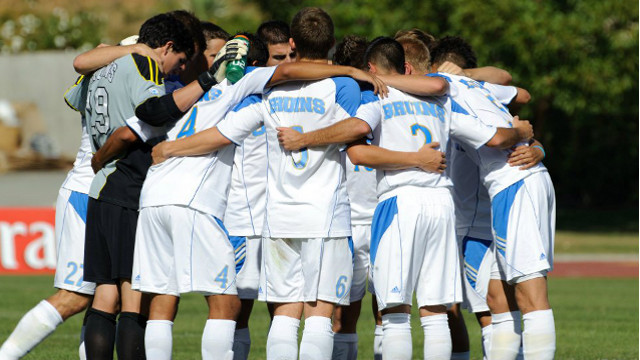 With five goals let in in the first two games, the UCLA Bruins (4-1-1) knew they had to change something with their defense going forward. So, the Bruins turned to their attack.

“The big difference is our possession,” UCLA center back Joe Sofia told TopDrawerSoccer.com. “We are really committed to each other and to keeping the ball.”

The possession style, a trademark of the UCLA philosophy, always takes a few games to take effect with the player turnover from year-to-year in Westwood, but this season the players have caught on quickly. 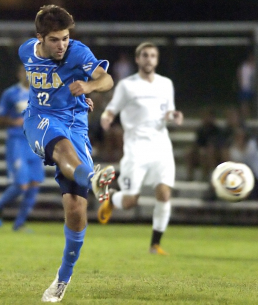 “Getting those first few games under the belt is definitely hard,” senior Ryan Hollingshead told TopDrawerSoccer.com. “We weren’t clicking off the bat. After those games though, we have started to click.”

With the amount of turnover from UCLA’s roster last year (six starters, 12 players overall lost), there was bound to be some hiccups to start this season, but, seemingly, those have quickly disappeared.

Over the last four games, UCLA has only let in one goal against Virginia, Tulsa, UC Irvine, and Loyola Marymount while stringing together a four-game winning streak.

“We can rely on the defense to get shutouts,” Hollingshead said. “We feel very comfortable with this group – this is the best we have looked this early in the season.”

“As a group, we made it a goal to cut down on the goals against,” Sofia continued about the team philosophy. “We have really started to buckle down defensively.”

Offensively, the attack has not had a breakout game yet with only nine goals scored in six games, but with the midfield holding possession for so long in games, it has hardly mattered how many times the Bruins score.

Hollingshead is tied for top scoring honors on the team with junior forward Reed Williams; both have a modest five points.

Part of the success this season, in terms of possession and results, has been the play of the freshmen who have stepped into the lineup immediately.

“I think the main thing for the freshmen is confidence,” Hollingshead continued. “There is a reason these players are here and sometimes they need to be reminded about that.”

LA Galaxy Academy product Grady Howe has been the main contributor from the freshman class. Howe has played every minute except for 10 this season for the Bruins.

Goalkeeper Juan Cervantes has also done well when called upon, as junior Earl Edwards suffered a back injury in the first game of the season and just made his return on Sunday in 1-0 win over LMU.

“Juan Cervantes did a great job filling in,” Sofia said. “He made some key saves in those games.”

With the freshmen chipping in and the returners rounding back into form, the Bruins are looking sharp once again and much earlier than before.

UCLA faces a big challenge this week with a trip up the coast for games against UC Santa Barbara on Friday and then Cal Poly on Sunday.

“It is a huge game,” Sofia said about the rivalry against the Gauchos. “It is always a close game.”

If the Bruins have their way, the dynamic Gauchos attack (18 goals in six games) will be slowed just like UCLA’s last four opponents – by not being able to get a hold of the ball.