UConn looks to take next step in 2012 Comparing the 2011 and 2012 Connecticut Huskies men’s soccer seasons, and the two are quite similar.

At around this point last year, UConn was in the middle of an 11-game winning streak, with the first bump in the road a draw against Notre Dame on October 8.

This year’s script is very similar: the Huskies are 10-1-1, suffering their first loss on October 6 on the road against an undefeated Marquette side. 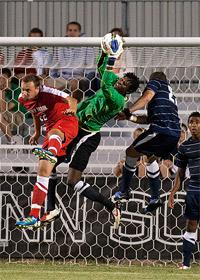 And while their unbeaten mark no longer remains, a lot of the pieces from last fall returned as well, from phenomenal goalkeeper Andre Blake, seniors Carlos Alvarez and Max Wasserman providing leadership, and Mamadou Diouf scoring most of the goals.

“I think we’ve got a lot of resiliency, we’re tough, we’ve got a good group of kids,” head coach Ray Reid told TopDrawerSoccer.com. “We’ve had a little bit of luck right now, we’ve got to keep riding it and playing hard.”

Looking forward, the key is for the Huskies to now alter the script, and write a completely different ending to this year’s season.

In 2011, UConn came up short not just in the Big East title game – losing to St. John's – but were knocked out of the NCAA Tournament in the quarterfinals, going out on penalty kicks after a 1-1 draw versus Charlotte at home.

“We have unfinished business,” Diouf told TopDrawerSoccer.com. “We need to finish it.”

The formula this season, along with the results, has been similar to last year. Connecticut keeps things very organized defensively, sitting back and looking to counter the opponent through Alvarez’s passing ability and Diouf’s pace.

Adding in the sophomore Blake at the back – probably the best goalkeeper in men’s college soccer – is icing on the cake. On Oct. 3 against Georgetown, Blake practically won the game by himself with three incredible saves to seal a 2-1 win.

“Obviously our responsibilities as defenders are to make his life easier, but his responsibility is also to make our life easier,” Wasserman said. “We have a lot of confidence in him, today was a great example of what he’s capable of.”

Along with the win over the Hoyas, the Huskies have also picked up wins against Big East counterparts like Notre Dame and St. John’s(m). The road ahead is obviously even more difficult and hard to navigate, naturally. But the team is confident with the way things are progressing, that the narrative is going to be altered and something new accomplished for this group.

“The good thing is the connection and the chemistry keeps growing, it never stops,” Wasserman said. “That’s kind of showing through how we’re playing. We treat every game like it’s the most important game of the season, so whether it’s a Big East game, out of conference game, it doesn’t matter.”

Blake isn’t the only big piece to that new story. Diouf, a forward with great speed and an ability to stretch defenses all by himself, must continue to provide the offensive punch alongside Alvarez.

The native of Senegal has learned to adapt to being a marked man, and has 8 goals so far on the year.

“When I get on the field, I’m trying to help my team,” he said. “If I have opportunities, I know I’m not going to get a lot, because every team you play, I feel like they already know [who I am] and it’s tough to get more than one opportunity. I need to find opportunity. That’s what you have to do if you’re a goal scorer, and that’s my job. I’m going to work hard, like I usually do, and keep it going.”

Reid, with his usual brevity, kept in simple when explaining the keys for the season’s run-in.

“We’ve just got to keep getting better, we need to get better the next game,” he said.