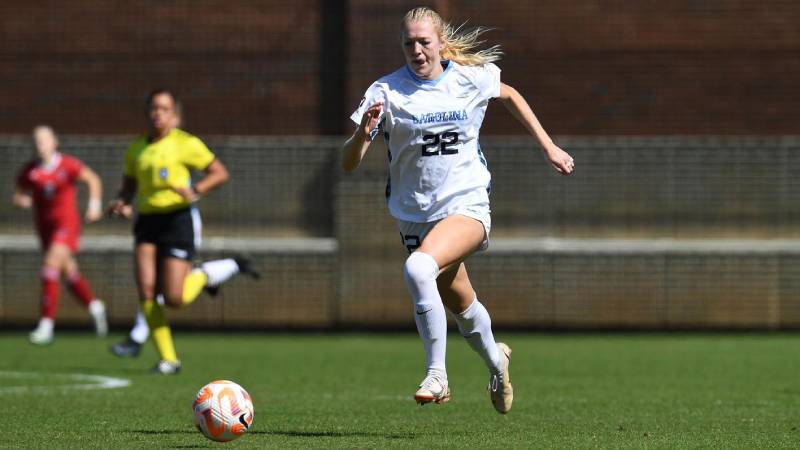 There was a brief moment when tensions flared. Florida State, down 2-1, conceded a throw in next to the North Carolina bench. The Tar Heel players and coaches gleefully burned seconds, once holding onto the ball and twice appearing to lose it. Words were exchanged and arms were waved in frustration. But tempers cooled, and the game continued to chug along. North Carolina defended dutifully for the remaining seconds, seeing out a game they had managed to near perfection.

The sequence encapsulated a cool 90 minutes for the Tar Heels. Though they had less of the ball, they were seldom truly threatened — turning in a composed performance to beat their ACC rivals, 2-1. The win left North Carolina and Florida State locked atop the ACC with two games to play. And although a lot is subject to change in the next week, it was a statement victory to steady an often tumultuous season for the Tar Heels.

This wasn’t a classic North Carolina performance. The Tar Heels didn’t flow in attack or really knock the ball around. On the stat sheet, they were thoroughly beaten. Florida State outshot them, 17-12, and enjoyed 60 percent possession. But this was a North Caroliina side that would not budge. Florida State tried to pick them apart with clever passes and angled runs, but the Tar Heels sat in, refusing to be moved. The usual North Carolina 4-3-3 formation was exchanged for a rigid 4-4-2 in defense.

And here is where the Tar Heels’ depth really shows. Head coach Anson Dorrance may have a lighter bench than usual, but his options are alike in tactical understanding, in reading of the game, ready to plug and play when introduced. Attacking midfielder Samantha Meza was putting in challenges and covering spaces on the left. Ally Sentnor — revered for her finish ability — dropped to provide cover as Florida State probed down the right.

There were moments of weakness. The Tar Heels were dragged apart for the Florida State opener. Three defenders followed Jody Brown, opening up a pocket of space for Jenny Nighswonger, who fed Onyi Echcegini for an easy finish. It’s those kind of situations that Florida State has thrived off in recent weeks. Get Nighswonger in the right spots, with runners causing problems, and the pass will arrive. But the star midfielder found herself frustrated for most of proceedings, constantly harassed by an opposing defender.

It was from that defensive intensity that the first North Carolina goal arrived. The Tar Heels won the ball back in midfield, before working the ball down the right. Sentnor found herself in a pocket of space and took advantage. The right footed player cut onto her left, pinging a shot at goal. But it careened into the hand of a Florida State defender — the referee swiftly pointing to the spot. Tori Hansen smashed the ensuing penalty into the roof of the net.

The rest of the game became something of a cautious affair for the Tar Heels. They ceded most of the ball, cutting passing lanes and furiously collapsing on any Seminole that might find herself in space. And they were ambitious in possession, a side always looking for the forward pass. Usual orchestrator Meza was seldom on the ball, with the Tar Heels instead opting to find the space between Florida State’s marauding outside backs. That was how the winner came. Sentnor darted down the right channel and controlled a pass in stride. She evaded three defenders, cut onto her left and fired the ball home. It was a sublime goal, the result of an astute setup and individual quality. But it was also a patient thing, the selection of the opportune moment to strike a side that was overcommitting in its quest for a winner.

With 30 minutes remaining, the Tar Heels sat on the lead. Florida State continued to push up, sending its full backs deeper into the final third. There were chances: a header flicked over the bar, a shot skewed narrowly wide. But the ball never seemed to fall kindly, the pass was never quite on time. There was gamesmanship from the Tar Heels, too. Tactical fouls were perfectly executed, throw ins drained minutes off the clock. And North Carolina finished the game cooly, seeing away some last gasp efforts to clinch a crucial ACC victory.

The result will likely mean little come November. One of these teams will win the ACC regular season title — the other will finish second. One will probably be a no. 1 seed in the NCAA Tournament — the other might have to settle for a no. 2 spot. Both will be equally competitive in the conference tournament — and could well meet again in the championship.

For North Carolina, then, this was a showing indicative of what might be possible. The Tar Heels have lost to Virginia and Virginia Tech and faltered against UCLA. Those were imperfect showings, defined by small mistakes and lapses of concentration. This one might not have been perfect. But it was pretty close. And that might just be enough as the season drags on.