There hasn’t been a repeat champion in men’s college soccer since 2004.

North Carolina is the team in position to do that after last year’s triumph – but are they capable?

It’s a challenge certainly acknowledged by Carlos Somoano’s side, but one that won’t be dominating the team throughout the course of the 2012 season.

“We don’t really think like that at all,” midfielder Jordan Gafa told TopDrawerSoccer.com. “We know what we did was great last year. I think the most I can say about that is that we use a lot of examples from last year’s team towards this year’s team.” 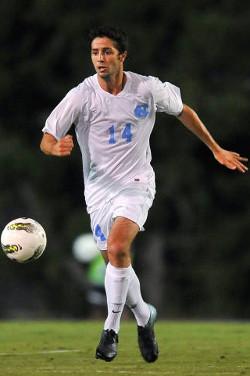 And this year’s team is going to look a lot different than the one that stormed to an impressive treble – winning the ACC regular season, ACC tournament and hoisting the national championship thanks to a 1-0 defeat of Charlotte last December.

Key pieces left early along with the senior class, including Billy Schuler, Ben Speas and Enzo Martinez, all bolting to professional ranks. That, combined with the graduation of Kirk Urso and Matt Hedges, left a number of holes to fill.

Gafa, along with goalkeeper Scott Goodwin, defenders Jordan McCrary and OC Okwuonu, and midfielder Mikey Lopez are the significant returners, but the offense took a hit with forward Robbie Lovejoy likely out for the season with an injury.

The defense looks solid, anchored by the trio of McCrary, Okwuonu and Goodwin, but it’s the midfield, and especially the attack that Somoano has been focusing on during the early part of preseason.

“I think the major thing for us this year’s going to be scoring goals – getting our attack in sync,” Somoano told TopDrawersSoccer.com. “We have a lot of very good players capable of scoring goals, but the way we try to do it, linking up together and getting everybody in sync is going to be the hard part.”

The leading returning scorer – not including Lovejoy – is Lopez, who tends to play deep in midfield, and only scored three goals last fall. Somoano does have a wealth options, although none are proven at the collegiate level. It’s also the matter of finding the right combinations and getting everyone up to speed in the proper amount of time.

“We have some great goal scorers on our roster,” Somoano said. “We do have some players more than capable of scoring, and good at it, it’s just putting it all together so that the team is scoring goals, and we’re solving our problems together and that’s the challenge in soccer, it’s just tough to do.”

Candidates include Cameron Brown, a long-time member of the team who missed the last two seasons with various injury issues, junior forward Andy Craven, an incoming transfer from the College of Charleston, returning forward Cooper Vandermaas-Peeler and freshman Danny Garcia, who scored 20 goals in the Development Academy season for FC Dallas U18s.

If a pair from that group – not to mention other spots on the field – can jump in right away and help the team find the back of the net at an adequate enough rate, the defense looks good enough to vault the Tar Heels into contention for yet another College Cup run.

However, that’s not the focus of Carolina at the moment. They have strong self-confidence, but perhaps the biggest lesson from last season is to keep focusing on simply improving day-by-day, and hoping that success comes with it – just like it has in the past.

“We are good, we know what we can do and can make a final run and all that, but we’re really focusing on Gardner Webb [Saturday’s opening opponent],” Gafa said. “It really is just one game at a time right now, getting better each and every day and each and every week, the same thing we did last year.”