Upsets highlight first round of tournament 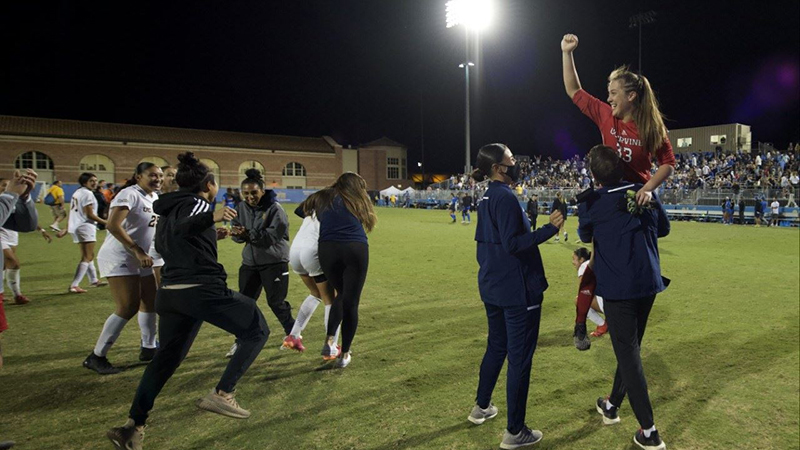 Three seeded sides suffered losses at home, as the first round of the women's Division I featured some big names falling.

Previously unbeaten UCLA, a No. 2 seed, lost for the first time in the fall season against Big West champions UC Irvine. Alyssa Moore's 14th minute goal proved to be the difference, sending the Bruins home. Glo Hinojosa also made eight saves to secure the shutout and a famous win for the Anteaters.

The Bruins weren't the only perennial power to fall by a 1-0 score at home. North Carolina, also a No. 2 seed, were undone by South Carolina. Luciana Zullo accounted for the winning strike in the 81st minute.

A great pass from @pf_chang24 sets up @lucianazullo for a wide-open shot at the goal! pic.twitter.com/cHnKAAroCl

With Stanford and Santa Clara matched up in the first round, one recent champion was going to see its season come to an end.

It was the Pac-12 side that came up short, falling 1-0 on a Makoto Nezu winner. It was Nezu's first goal of the season, coming in the 59th minute. The Cardinal had a golden chance to tie the game in the 73rd minute, but Santa Clara goalkeeper Kylie Foutch stepped up and saved Maya Doms' penalty kick.

The defending spring champions live to fight another day.

While some of the favorites went home for good, others had little trouble.

Virginia blitzed High Point with four goals in the first half on the way to a comfortable 6-0 win at Klockner Stadium. An own goal in the 12th minute kicked things off, and five different players accounted for the offense: Sydney Zandi, Alexis Theoret, Sarah Brunner, Diana Ordoñez and Kira Maguire.

The high-powered attack of BYU hummed to life in the second half of their first-round matchup, scoring five times in a 6-0 defeat of New Mexico. Cameron Tucker's tally in the 36th minute kicked things off, but it was quickfire double from Brecken Mozingo in the 52nd and 54th minute that extended the lead to three and put things away.

Just like they did in previous College Cup runs, things are looking intriguing for Georgetown in the wake of UCLA's upset. With the Bruins losing on Friday night, Georgetown, which hosted Central Connecticut on Saturday, knew that a win would open the door for the Hoyas to host the second and third round on the Hilltop.

And while the scoreline ended up at 6-0, it took Georgetown 55 minutes to finally find the back of the net when Kelly Ann Livingstone scored. That would open the floodgates, setting up a second round matchup against Santa Clara. Still, instead of hopping on a plane for a second round match out west, the Hoyas now host the Broncos, along with UC Irvine and Wisconsin.