The 2015 U20 CONCACAF Championship kicks off on Friday with all six teams from Group A in action. This marks the first World Cup qualifying event with the new format, which puts more emphasis on placement in the group with the top finishers from each group earning a berth to the World Cup. The overall third, fourth, fifth, and sixth place finishers from both groups move onto playoffs with the winners from those games earning berths to the World Cup in New Zealand.

Tab Ramos announced his 20-man roster on Monday and with five games in 12 days during group play, he’ll need all 20 players to contribute in Jamaica. The U.S. opens play on Friday against Guatemala, which can be seen live on Fox Sports 2.

Below is a breakdown of the important notes about the U.S. squad heading into qualifying. 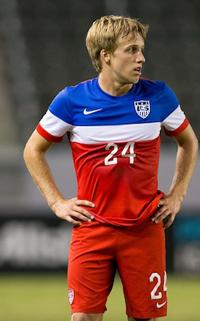 Cameron Carter-Vickers, Tottenham Hotspur – The lack of depth in the defensive positions on this roster should be some concern. There are three true center backs on the 20-man U.S. roster and a couple of options for players to fill those roles in a pinch. Carter-Vickers, the youngest player on the team at 17 years old, is one of those three center backs and he does not have much experience with the other two. The English-born defender with a U.S. father received his first call-up to a U.S. camp in August and has been bouncing around age groups since then. The teenager is likely going to start for the U.S. in the opening game and could be penciled in for the lion’s share of minutes at one of the two center back roles. The initial reports about the defender have been glowing with coaches and players citing his ability on the ball and in one-v-one situations. The question remains about how he will fit in with the other pieces around him on this squad. All indications point to Carter-Vickers having a bright future with the Federation and this is the first real introduction he will have to the fan base at a major event.

Ben Spencer, Molde FK – In Tab Ramos’ system of play, the team needs a target forward to play off of in order to open up the field for the other players to join the attack. Ben Spencer is the only forward on the roster over six feet tall. He might not start every game, but he is going to start the important ones because the U.S. needs to keep the opposition honest and stretch the field with a forward who can punish mistakes and play with his back to the goal. Spencer has the tools to being the leading scorer at this event. He is good on the ball and solid in the air. He is a very valuable piece to the success of this team in Jamaica.

Emerson Hyndman, Fulham - There was some conjecture surrounding Hyndman’s availability for this tournament, considering he wasn’t included in the initial camp roster. But here Hyndman is, ready to boss CONCACAF midfields. Judging by his recent form with Fulham, it’s clear Hyndman’s benefitted from stable first team minutes in the Championship. He might be the most talented midfielder in the tournament, and he’ll be the purring engine for a midfield unit that will look to control possession in every one of its matches. Hyndman’s ability to both track and support attacks will be crucial for a midfield that will be asked to cover for an inexperienced back line.

Tommy Thompson, San Jose Earthquakes - Every attack needs an X-Factor, or a component that’s especially difficult to account for. Thompson can fill that role for this U20 side. For club, Thompson largely slotted into a second striker role in support of Chris Wondolowski. For country, Thompson can do a number of things, including playing on either wing to pinch in and support. The bottom line is that Thompson is a wild card on possession, capable of doing things not many other American players can. So whether Thompson plays pinched underneath a target man like Spencer or out wide pressing fullbacks and tucking into defenses, Thompson can do a bit of everything. And watch out for an occasional breathless moment on ball or two.

Is the U20 team at a point where it should expect to win its group?

Will: There’s no question. CONCACAF qualifying is still a bit of a white whale for the U.S., surprisingly enough. The U20 team has made plenty of World Cups, but it’s never won this tournament outright. While that’s an admirable (and obtainable) goal for this team, the new qualification format means that the U.S. just has to win a winnable group of six teams and it’s in the tourney. CONCACAF always throws some surprises in the mix, and the U.S. won’t expect to simply walk over its opposition, but there’s enough talent here that failing to win the group will be a troubling sign.

J.R.: Yes. The amount of resources and time devoted to the U.S. youth national team age groups put more pressure on the teams to produce results in marquee events. U.S. U20 Men’s National Team head coach Tab Ramos is in his second cycle with this level and he should have his squad ready for this type of event. This group at the CONCACAF Championship is relatively weak and the U.S. should be the heavy favorite despite playing against the host side.

Is this inexperienced back line ready for primetime?

Will: The short answer is that it depends who the U.S. plays. But in CONCACAF, the answer should be ‘probably.’ This tournament will be a bellwether for how ready the defense is for a World Cup that will throw a lot more talent forward than what they’ll see in Jamaica. If they can zip up and pitch a few shutouts, the midfield can ease off and focus more on building attacks. If not, and a possible center back pairing of Matt Miazga and Cameron Carter-Vickers is forced to carry the load, there could be choppy waters ahead.

J.R.: The strength of this team appears to be in the midfield, which should cover up some of the holes in the defense and allow the U.S. to control the game with the ball. Shaq Moore, John Requejo, and Tyler Turner are the main options at outside back in this 20-man roster. That trio has experience at the U17 level and the latter two have already begun professional careers. The three center backs of Cameron Carter-Vickers, Conor Donovan, and Matt Miazga leaves some question marks. It’s been a revolving door at center back during the build up to this event. There’s potential for two of those three to develop some chemistry against weak opponents in Jamaica and solidify the defense moving forward with this age group.

What’s the biggest challenge for this particular group of players?

Will: Managing expectation has become a serious chore for U.S. youth national teams of late. Both the U17 and U20 teams have failed to qualify for a World Cup since 2011 in a region that should’ve been its oyster. Whether that’s down to coaching, team cohesion or the individual talent simply not being good enough, the U.S. once again finds itself in a place of qualify-or-bust. Managing that pressure and channeling it into productive avenues isn’t easy, but it’s necessary. Finding balance and shutting out distraction is crucial.

J.R.: The biggest challenge is consistently breaking teams down that bunker on the U.S. Coming into an event as favorites offers some challenges and one of them will be playing against teams that will likely put eight or nine behind the ball at all times. The U.S. does not get that experience when it plays in Europe or South America so it can often take some time to adjust to being the squad with the ball trying to fool the opposition. There are some nifty playmakers in this group in Tommy Thompson and Junior Flores. Getting those creative types on the ball will be paramount for the success of the team.

What’s the ceiling for this team?

Will: This all depends on what the group looks like at the World Cup. If it’s something like they saw in 2013, simply emerging alive to reach the knockout stage would be something of a coup. If it’s an easier group, as it almost assuredly will be, matching the 2007 team by winning a knockout game should be a reachable goal. There’s little question about emerging from CONCACAF. With this much talent playing professional first team minutes, this team is as primed as any to make a probing run.

J.R.: The ceiling for this team is the potential to play an attractive blend of soccer that will entertain and engage the viewer. There is a huge opportunity here for Ramos and his staff to go down to Jamaica and play the way that U.S. head coach Jurgen Klinsmann is asking of the youth national teams. There is a ton of talent in the midfield roles along with some versatility. With the number of professionals on this squad, the level of play should be much higher than in the past. A CONCACAF Championship is the immediate target and just a stop on the way to bigger goals.

Is there a particular U.S. player who could have an outsize impact in this tournament?

Will: If we’re following his progression, I’m excited to see what Shaq Moore brings to the table. It’s a sure sign of his ability that he’s been able to latch onto the final roster despite not have a sure-footed club situation in some time. Moore has oodles of YNT experience, and he’s as versatile as they come. He’ll probably slot in at right back given previous deployments, which makes his role crucial going forward. Moore’s played plenty of right back, but he’s also an adept defensive midfielder and can slot in at center back in a pinch. For an inexperienced back line in need of a steady hand, Moore might have an enormous role to play.

J.R.: Given the way these tournaments usually go with the opposition trying to counter attack against the U.S., FC Dallas youngster Kellyn Acosta could be in the spotlight for much of the event if Ramos continues to deploy him as a defensive midfielder. Acosta has the athleticism and speed to be tremendous at the spot, but his tactical discipline will come into question in these games when the U.S. pushes numbers forward and leaves Acosta as the blanket in front of that inexperienced defense.