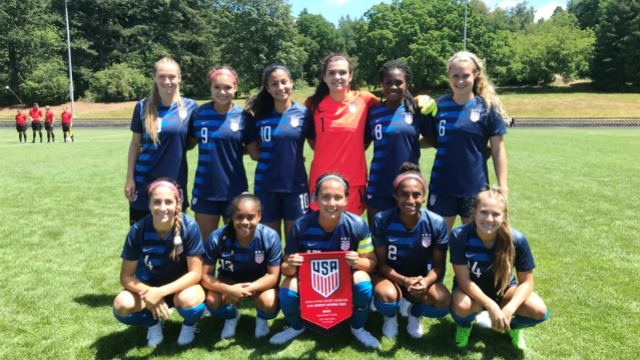 U.S. Under-20 Women's National Team head coach Jitka Klimkova has named the 21 players who will represent the United States at the 2018 FIFA Under-20 Women's World Cup to be held Aug. 5-24 in the Brittany region of northwestern France.

Klimkova named the final roster after the completion of a training camp last week in Portland, Oregon, that featured two matches against Brazil.

The USA roster is made up of 16 current collegiate players and five youth club players who will enter college this fall. All five competed in the recently-completed first season of the U.S. Soccer Girls' Development Academy. Players born on or after Jan. 1, 1998 are eligible for the World Cup. The U.S. roster is made up of seven players born in 1998, 10 born in 1999 and four born in 2000.

"Honestly, these were some of the toughest decisions I've had to make in my coaching career," Klimkova said. "The overall pool was so competitive and we needed every training session and game before we selected the final 21. We are confident that the group we picked is the best team. We looked at many factors over the past year from their influence and decision making in games to their training mentality and versatility, to the intangibles, and of course their performances in international matches. The credit goes to the players for their work ethic and mental toughness throughout the process."

Three players - Fox, midfielder Savannah DeMelo and forward Ashley Sanchez - return for their second U-20 Women's World Cup after featuring at the 2016 tournament in Papua New Guinea. While DeMelo only played sparingly at the tournament two years ago, she's figured prominently in this cycle and heads to France as the squad's most-capped player with 36 U-20 appearances. After playing in all six of the USA's games in Papua New Guinea, Fox missed almost a year on the field due to recovery from ACL surgery, but proved her fitness during the USA's Portland training camp to make the squad. In 2016, Ashley Sanchez became the first U.S. player to score in a U-17 and U-20 WWC in the same year.

Smith enters the World Cup as the USA's leading scorer with 21 career goals at the U-20 level. The forward has scored in 10 of the USA's 15 games this year, including a current nine-game scoring streak heading into the tournament. Beginning in March, her goal-scoring run stands as a Youth National Team scoring record and ties Michelle Akers' nine-game streak at the senior level in 1991. Her 21 goals are good for fourth on the U-20 WNT's all-time scoring list behind Sydney Leroux (29), Kelley O'Hara (24) and Lindsey Horan (24).

"We now have our sights set on France, and we are feeling confident," said Klimkova. "We play an attacking, creative and aggressive style of soccer that is fun for the players, and I feel we've made huge improvement since the Concacaf qualifiers. We all agreed that the performance in Trinidad wasn't our best, but since then we've made progress every time we are together. I feel like we've come together off the field as well, we are a family now who are pursuing our dreams together."

The 2018 FIFA U-20 Women's World Cup features 16 nations divided into four groups of four teams. The top two finishers in each group advance to the knockout round quarterfinals. All 32 matches of the tournament will take place in four venues across France's Brittany region.

The U.S. opens the tournament on Monday, Aug. 6 against Japan, faces Paraguay on Thursday, Aug. 9 and closes out the group stage against Spain on Monday, Aug. 13. All of the USA's matches will be broadcast on FS2.

"Every camp we've had has been a learning process," said Klimkova. "We spent a lot of days together, and sometimes it was tough, but it was worth every training session. In every international game we played, we made positive strides and improved. Now it's time for the players to perform with confidence at the highest levels for this age group, and we cannot wait for that challenge."