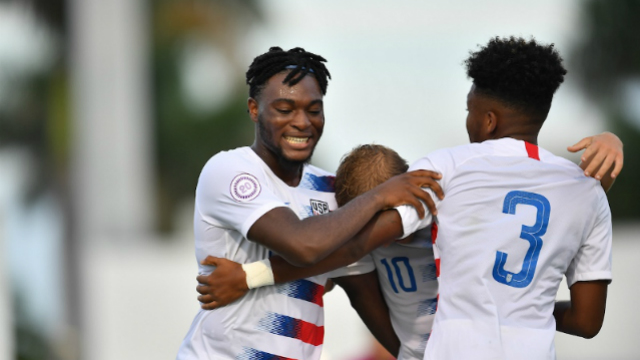 The U.S. Under-20 Men’s National Team kicked off the 2018 Concacaf U-20 Championship with a 7-1 victory against Puerto Rico. A burst of scoring in the game’s opening 30 minutes put the USA ahead early and it added to its advantage with four second-half goals to start its World Cup qualifying campaign on a high note.

Forward Justin Rennicks and midifielder Alex Mendez served as the USA’s spark-plugs in the early-going. In just the fifth minute, Mendez slotted a dangerous pass to Paxton Pomykal in the box, and Pomykal sent a cross in to the onrushing Justin Rennicks, who tapped it in for the game’s opening goal. Six minutes later, a nice exchange up the right wing ended with Rennicks delivering a ball to Mendez near the penalty spot where he one-timed it inside the near post.

Puerto Rico’s defenders made a handful acrobatic goal-line clearances to keep the U.S. lead from growing, but some nifty dribbling from Pomykal in the 27th minute gave the FC Dallas forward an opening to slot home the USA’s third goal. Luis Miguel Cosme hit back for Puerto Rico shortly thereafter in the 33rd minute to narrow the scoreline to 3-1 in favor of the U.S. as halftime approached.

The U.S. continued to control the game and find the back of the net after the half. Ayo Akinola netted two close-range goals, one just after the break in the 49th and another with his head in the 69th. Rennicks secured his brace with a penalty kick goal in the 57th.

Forward Ulysses Llanez made the most of his 23-minute, substitute appearance, making a nice run and assisting Akinola’s second goal just two minutes after entering the game, as well as netting a header of his own for the USA’s final goal in the 86th minute.

Up Next: The U-20 MNT continues the 2018 Concacaf U-20 Championship with its second Group A match against the U.S. Virgin Islands on Saturday, Nov. 3. Kickoff from IMG Academy Stadium in Bradenton, Fla. is set for 6 p.m. ET, and the match can be seen live on UDN and Concacaf GO.

Goal Scoring Rundown:
USA – Justin Rennicks (Paxton Pomykal), 5th minute: Alex Mendez jumped on an errant pass from Puerto Rico and quickly controlled it before slotting it forward to Paxton Pomykal on the left wing. The FC Dallas forward sharply delivered a cross into the box for Justin Rennicks, on the run towards the net. The ball deflected off of Rennicks’ marking defender, and he tapped it in to open the game’s scoring. USA 1, PUR 0

USA – Alex Mendez (Justin Rennicks), 11th minute: An impressive interchange between Jaylin Lindsey and Rennicks catalyzed the USA’s second goal. Coming up the right wing, Lindsey played it up to Rennicks, who beat a Puerto Rican defender to the bouncing ball. The Indiana forward quickly passed it back inside to Lindsey, and the Sporting KC defender dished to Rennicks on a run across the end line. Rennicks sent a cross to Mendez near the penalty spot and he delivered the one-time finish to extend the U.S. lead. USA 2, PUR 0

USA – Paxton Pomykal (Brandon Servania), 27th minute: Brandon Servania intercepted a Puerto Rican pass, dribbled up and found Pomykal on the wing. He cut inside with the ball, dribbled around the ‘keeper coming off his line to defend and maneuvered around another onrushing defender. As he fell down, the FC Dallas forward slotted it home to the opposite post. USA 3, PUR 0

PUR – Luis Miguel Cosme, 33rd minute: On Puerto Rico’s most-dangerous possession of the first half, Alejandro Rabell played the ball into Kevin Hernandez near the top of the box. The U.S. defense forced a turnover, but a misplayed clearance landed at the feet of Luis Miguel Cosme. He fired it past U.S. goalkeeper Brady Scott to the left side of the net, putting Puerto Rico on the board. USA 3, PUR 1

USA – Ayo Akinola (Jaylin Lindsey), 49th minute: With Puerto Rico on a breakaway, the U.S. defense recovered nicely and launched an attack. Juan Pablo Torres came up with the ball and played it up to Pomykal on the left side. He made a nice run, dribbling from the wing up the center before dishing to Mendez near the top right corner of the box. Mendez quickly played it up to Lindsey inside the box, he sent a cross in near the six-yard-box, where Akinola controlled it on the run and pushed it forward for the USA’s fourth goal. USA 4, PUR 1

USA – Justin Rennicks (penalty), 57th minute: Pomykal controlled a long pass from Servania near the 18-yard-box, and when he attempted to enter the box, Jose Calderon brought him down with a hard foul. The play drew a penalty, and Rennicks stepped up for the kick, cleanly finishing to grow the U.S. advantage. USA 5, PUR 1

USA – Ayo Akinola (Ulysses Llanez), 69th minute: Scott collected a misplayed Puerto Rican pass near the top of his box and played a long ball to Ulysses Llanez up the left wing. Moments after being subbed in, Llanez first touch was dangerous as he started to move inside, but when the Puerto Rican ‘keeper came out to defend him, he sent a service to Akinola flying down the center channel. Akinola nailed the header on the open net to bag his brace. USA 6, PUR 1

USA – Ulysses Llanez (Griffin Dorsey), 86th minute: Mendez won a hard-fought ball in the midfield and got the ball up to Servania. He dribbled downfield and dished to Pomykal on the right side. Pomykal moved the ball further towards the right wing with a pass to Dorsey near the end line. He sent a flying cross in towards the net, and while it missed Akinola’s head, it found Llanez, who headed it home for the USA’s final goal. USA 7, PUR 1 FINAL

Key Saves and Defensive Stops
PUR – Sebastain Diaz, 17th minute: After Servania recovered a Puerto Rico turnover, he played it into the box for Akinola. The Tornoto FC forward put together a nice exchange with Rennicks, which sprung Akinola free with a wide-open chance from the six-yard line. He sent a shot towards the net, but Sebastian Diaz made a diving goal-line clearance to limit the damage in the early-going.

PUR – Nicolas Cardona, 21st minute: With the goalkeeper rushing towards him, Rennicks leapt to take a touch and push the ball past him. It fell to Pomykal and he took a shot on goal, but Cardona made a leaping save to keep the ball out of the net.