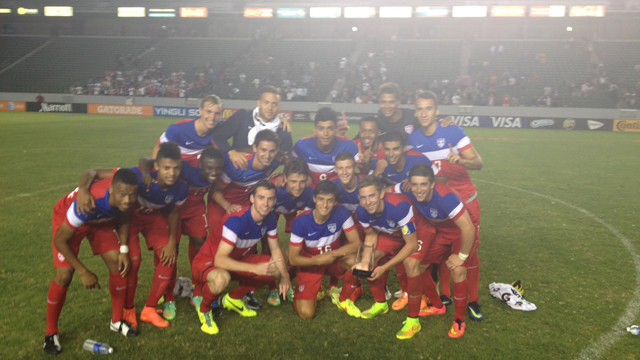 CARSON, California — The U.S. U20 Men’s National Team played to a scoreless draw Friday night against Australia in the final game from the 2014 U.S. Soccer Invitational at the StubHub Center.

Both teams finished the event with seven points from three games. The U.S. ended as the champion of the tournament via a better goal differential (+5 vs. +4). Although level at the end of 90 minutes, U.S. was the deserved winner.

The host side had the better chances throughout the 90 minutes and was incredibly unlucky not to score.

Sunderland attacker Lynden Gooch hit both posts and the crossbar. Romain Gall also struck the crossbar on a free kick.

“I’m happy we responded well to all of the scenarios because we are learning,” Ramos continued. “We created a ton of chances to win the game, but unfortunately, the ball did not go in the back of the net. I think we hit four or five posts. Defensively, we corrected some things at half time and in the second half we shut them down completely.”

The early jitters nearly punished the U.S. after only a few minutes when Australia striker Brandon Borrello snuck in between the center backs and had a positive first touch toward goal. Zack Steffen was strong off the line and took the ball off Borrello’s foot.

U.S. answered with a golden chance of its own. Australian keeper Jordan Thurtell left his line to punch away a cross, but an Australian defender beat him to the ball and headed it only as far as Fernando Arce. The Club Tijuana midfielder hit a side volley into the open net, but Riley Woodcock headed it off the line.

Romain Gall had the next look for the U.S. The winger was chopped down from behind about 22 yards from goal. He stepped up to take the free kick, which he lifted over the wall, but it did not drop quickly enough and hit off the top of the crossbar.

Steffen was called on again 12 minutes left when Daniel De Silva struck a shot from just outside of the 18-yard box. His hand reached the ball on a diving save and pushed it out for a corner.

Gooch broke free of the Australia defense in the middle of the field with eight minutes left in the half. His darting run forward opened up a path for him to goal where he struck a shot from 20 yards out. His effort beat Thurtell, but the post kept the shot out.

The U.S. entered the break with an advantage in shots and grew that lead in the second half.

Gooch came out of the locker room with his eyes set on the goal. He duplicated his effort from the first half, but came even closer to scoring the opener as the rebound off the post hit the goalkeeper in the back of the head, but went out for a corner kick.

Outside of the shots that hit the post, Tommy Thompson had the best chance of the evening when he skated past two defenders inside the box, but Thurtell stopped Thompson on the doorstep.

With 15 minutes left, Gooch had another shot from just outside the box after pushing away from his defender. This time, Thurtell put his fingertips on the shot and pushed it off the crossbar for a corner kick.

U.S. pushed for a goal, but could not find one in the final minutes and the teams settled for the scoreless draw.

Chile finished the 2014 NTC Invitational with a win after dominating Bermuda from the opening whistle on Friday. Bermuda goalkeeper Detre Bell did all he could to keep Chile off the score sheet, which included two quality diving saves on either side of the half, but he was not enough to stop the South American side.

Chile eventually broke through in the 72nd minute when Camilo Rodriguez linked up with Ignacio Jeraldino at the top of the 18-yard box. The quick combination opened up a clear channel for Rodriguez who slotted his shot into the back of the net.

Chile doubled the lead with four minutes left when Jeraldino broke free from the Bermuda defense and beat goalkeeper Bell with a low shot to the corner.

Despite the loss, a few of the college soccer players on Bermuda did show well on Friday as well as throughout the week. Boston College sophomore Zeiko Lewis was a bright spot of the attack as he proved to be capable of handling the pressure and worked his way out of tight spaces on a few occasions.