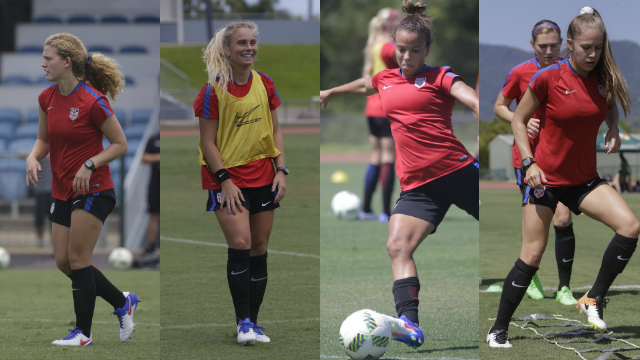 While the back line and goalkeeper situation heading into the U20 Women’s World Cup is easier to get a read on from a U.S. perspective, there is a little more unpredictability among the forwards and midfielders. There’s plenty of quality and depth, though pre-tournament preparations indicate that things are likely in flux even during this week’s camp in Australia.

A lot of that could come down to team shape and formation, and whether head coach Michelle French opts to go with a 4-3-3, 4-5-1 or a 4-4-2. One of those three seems the likeliest outcome, though it’s hard to say for sure.

The midfield is where things could be really interesting; depending on if French deploys three or four in the middle of the park. There’s one player that seems likely to be involved no matter what, with Emily Ogle will anchor the team in the middle of the park at the No. 6. The Penn State star needs to have a big performance each game as the United States looks to play out of the back and connect passes all over the field.

Beyond that, a number of different variations could take place. Attack-minded midfielders like Marley Canales and Katie Cousins are candidates to both patrol the No. 10 and No. 8 spots in a three-player midfield, with Cousins capable of playing the box-to-box role. Canales isn’t an out-and-out attacker and better suited for a central midfielder role further back. French and the coaching staff also have used her at the 7 and 11 spots in wide midfield. She does the ability to connect passes in the final third to open up space for Mallory Pugh and Ashley Sanchez.

The other players offer versatility. Savannah DeMelo is primarily a central midfielder that can backup Ogle at the No. 6 or Cousins at the No. 8 spot. Courtney Petersen can play on the wing, in the middle or even as an outside back in a pinch, as the Virginia ace is reliable anywhere she’s one the field. Hedge, an All-Pac-12 Freshman Team honoree for Washington last year, also falls in the versatile category, popping up as a wide forward and a potential No. 10.

Parker Roberts, who transferred from Kansas to Florida ahead of the 2016 season (which she promptly redshirted) is the backup for Ogle. Capable of playing a defensive oriented role, look for her to come into games late to protect a lead. Roberts faces an uphill battle to slot into the starting lineup, and her involvement, like others, will be impacted by what formation the coaching staff decides on.

The attacking punch that the United States has to call on for this World Cup is certainly impressive, and a lot of pressure is set to fall on the shoulders of Pugh. The UCLA signee is a well-known commodity, and her ability to stretch defenses, score goals and create them are likely to have a big impact on how far this team can progress. She could partner up front with someone like Scarpa, the sole No. 9/hold up-type forward on the roster.

In a 4-3-3, a frontline of Scarpa, flanked by Pugh and Sanchez is first choice. Sanchez showed flashes at the U17 World Cup, despite the disappointing end to that competition. She’s always eager to take players off the dribble, and can thrive against defenses playing with high back line. Sanchez needs space to run into when she’s on the ball, so the tactical approach is certain to factor in to her success here.

On the heels of a strong sophomore year, Scarpa landed a spot on the team and is likely to spearhead the attack, whether it’s two or three forwards up front. She possesses a blend of speed and athleticism that can open up space for Pugh and Sanchez in the final third.

Offering depth up front is Watt, who can line up in any of the forward spots and play out wide, is a speed option for French to call upon. The Texas A&M stalwart fared extremely well in the SEC in 2015, and can offer a spark from the bench if the U.S. needs a goal.