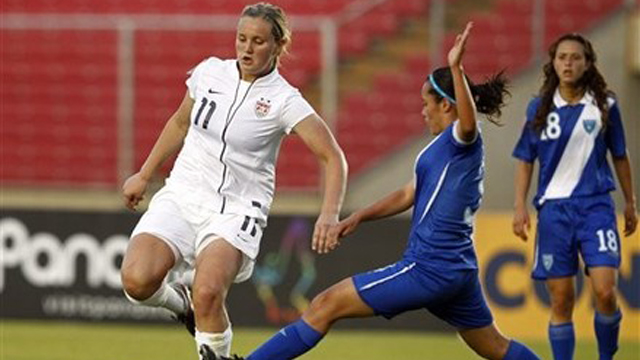 On Thursday, the U.S. U20 Women’s National Team took to the field again for the first time in a competitive game since claiming the CONCACAF Championship in March.

There was a bit of rust in the first time back for head coach Steve Swanson’s group, but it just took one goal early in the second half to shake that off and get his squad right back in sync.

“It has been a good break for us,” Swanson told TopDrawerSoccer.com. “I thought we had some nice ideas out there today. And I felt there was carryover from our last time together.”

The first half offered little in terms of attack, as China appeared content to sit back with numbers against a potent U.S. attack. The strategy worked for the most part, as the U.S. only mustered one shot on goal in opening stanza and it hardly challenged China’s goalkeeper Yang Yan.

Swanson said after the contest that he thought the U.S.’s pressure in the first half helped open up the attack in the following 45 minutes.

China, to its credit, had a fairly decent chance of its own to break the dreadlock in the first half. Defender Wang Yingying slipped through the U.S. defense and found herself in on goal, but the defender stumbled over her own feet and did not even get off a shot.

The second half saw substitutes Samantha Mewis and Katie Stengel turn the game on its head immediately with their introduction.

“I thought we were maybe going east to west too much in the first half,” Swanson added. “In the second half, we found some space vertically.”

The U.S. grabbed the opener only one minute after the halftime break ended. Kealia Ohai dribbled past her defender and sent in a cross to the far post that Stengel ripped toward the net. Lindsey Horan (perhaps inadvertently) pushed the shot in the right direction with her knee and was credited with the goal.

Five minutes later, Stengel and Mewis linked up via a 1-2 on a quick attack down the center. Mewis picked out Horan’s run and lofted it over the defense to the Real Colorado striker. As cool as a milkshake, Horan slotted it past the keeper for her second of the afternoon.

The visitors managed to cut the lead in half in the 84th minute when Cari Roccaro fouled Yang Lina in the box. The referee correctly called the penalty kick, but it was an unfair blemish on Roccaro’s outing as the center back was quality throughout the contest and caught in an awkward challenge on the foul.

U.S. goalkeeper Abby Smith nearly stopped the penalty kick by Liu Shanshan, but the shot proved to be too powerful for the Dallas Texans star.

The U.S. restored order four minutes later when Mewis grabbed her second assist of the outing. This time the UCLA midfielder found substitute winger Chi Ubogagu in 1v1 situation against the last defender only 25 yards from goal.

Ubogagu deftly turned her mark and put it past the keeper to give the U.S. a 3-1 advantage.

Two minutes into stoppage time (and with the last kick of the game), Mewis put the cherry on top of a stupendous second half performance with a goal of her own. The U.S. pressure China into a turnover in its defensive third.

Once gaining possession, Stengel picked up her head and spotted Mewis running down the middle. Mewis buried the effort into the near post and capped a 4-1 victory for the home team.

“It was a good result,” Swanson said. “I think we need this. It is great we can play a team like this in an environment like this.”

Swanson used 17 players in the game, and was glad to have the opportunity to look over his roster in a competitive game against a challenging opponent.

“Qualifying is past - it is behind us,” he said. “So now, we are looking at solidifying a roster in the next two months [before the World Cup].”

The U.S. U20 WNT and China will meet again on Sunday at the Home Depot Center at 3 p.m.