With the U.S. full women’s national team fresh off its Olympic triumph, one of its youth teams looks to achieve similar success at an international tournament, as the U.S. U20 WNT aims for the U20 World Cup crown in Japan.

This is the sixth edition of the women’s tournament, a competition the United States has won twice before, and will look to add another notch to the title.

Coached by Virginia’s Steve Swanson, the U20s enter the competition with plenty of international competition under its belts, having played a total of 13 international matches in 2012, including a dominant march through CONCACAF qualifying (final match against Canada aside).

As usual, the team is comprised of the upper tier of players from women’s college soccer, and five are holdovers from the last U20 competition that was held in Germany.

The U.S. did suffer a bit of a blow a month before the tournament, as forward Lindsey Horan was ruled out because of knee surgery. However, the attacking options available should be enough to make up for her absence.

GK Bryane Heaberlin: Heaberlin has not been tested much over the qualifying stages or the domestic friendlies, but she is a capable keeper and likely to be tested on the grand stage.

D Julie Johnston: The captain’s confidence is probably her best attribute. She is the reassuring presence at center back that allows the rest of the squad to be ambitious and take their chances.

Center midfielders: This is cheating because it is not just one player but a group. The midfield position during this cycle has been very deep and Swanson likes to rotate the group to keep legs fresh. Morgan Brian, Samantha Mewis, and Vanessa DiBernardo all figure to be key pieces during the World Cup.

F Katie Stengel: The Wake Forest attacker is the creative force Swanson will rely on when the other teams try to bunker against the U.S. Stengel’s job is much more difficult now though with Lindsay Horan missing out on this event due to injury.

F Maya Hayes: The speedy forward in the one to keep defenses honest and make them fear the ball over the top. Hayes ended the U20 CONCACAF Championships as the leading scorer for the U.S. with five goals in five games.

Primary competition for the U.S. in Group D is Germany. The defending champions of the U20 World Cup are always dangerous at international competitions, and this World Cup should be no different. Players like Luisa Wensing (defender), Dzsenifer Marozsan (forward) and Ramona Petzelberger, the latter the star of the qualifying tournament, lead the way.

While less can be known about the level of Ghana and China, the two other nations in the group. The former is making its second straight appearance at a U20 World Cup, and the U.S. was grouped together with the African team in 2010, only to draw 1-1 in the group stage. Midfielders Priscilla Saheene and Elizabeth Addo represent two of their more dangerous options.

The Chinese can’t be counted out before a ball has been kicked. While recent spells in youth tournaments haven’t gone well, past women’s sides have finished as runners up at the U20 World Cups in 2004 and 2006. Yao Shuangyan and Wang Tingting are two of their influential players, but the team did struggle a bit to score in qualifying with just seven tallies in five games. 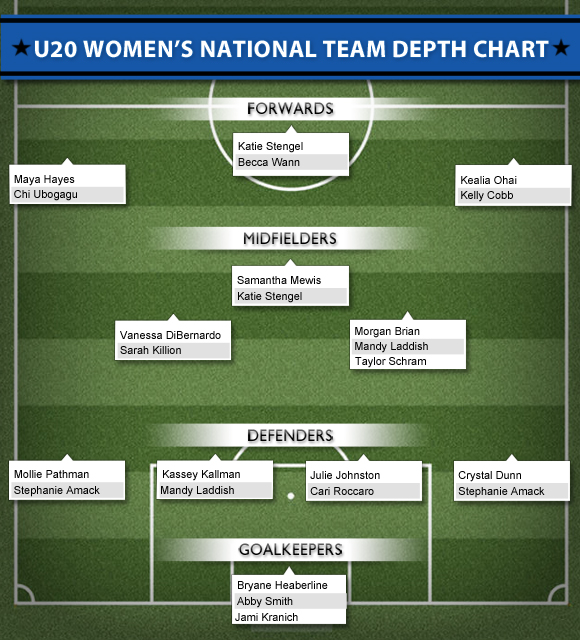